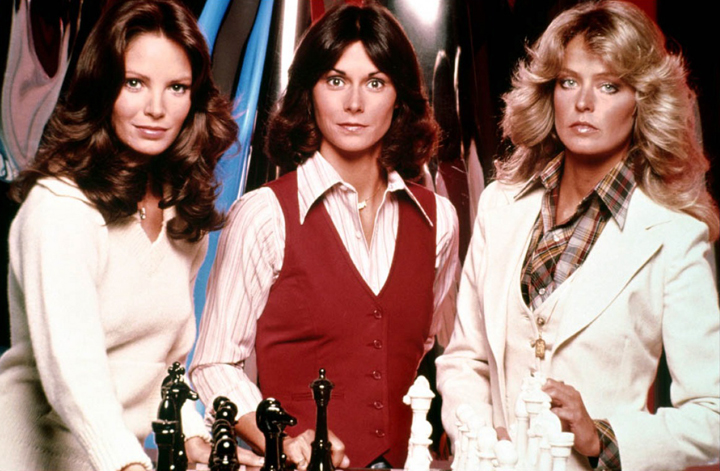 HEAVENLY...STILL:  The hair!  The clothes!  Those crazy gun-toting adventures!  No matter how many times it's remade on TV (yikes!) or the big screen (double yikes!), nothing can ever replace that tremendous trio of gals that stole our hearts, made women run to the beauty parlor and clothing stores, or hastened the puberty of thousands of young males more than Jaclyn Smith, Kate Jackson and the ever-bronzed Farrah Fawcett.  Wow!  With 110 episodes from 1976 to 1981, Charlie's Angels was THE show to watch.  (By the way, we're awaiting Kate Jackson's book The Smart One due any day now.)  What made the TV show so fascinating to many was the hair and clothes!  Costume designer Nolan Miller's true '70s styles and colors are still wearable -- and we've seen many recent runway influences from the fabulous clothes he made for that TV show of shows: Dynasty.  But that oh-so-handsome Allen Edwards -- the man who created the most copied TV hairstyle of all time for Farrah Fawcett -- is still practicing his incredible craft in Southern California.  So if you want to look like a star, Edwards is the man who can transform your tired tresses into a red carpet coiffure!
Allen Edwards interview:  http://beautyinterviews.com/pages/interview-with-allen-edwards/