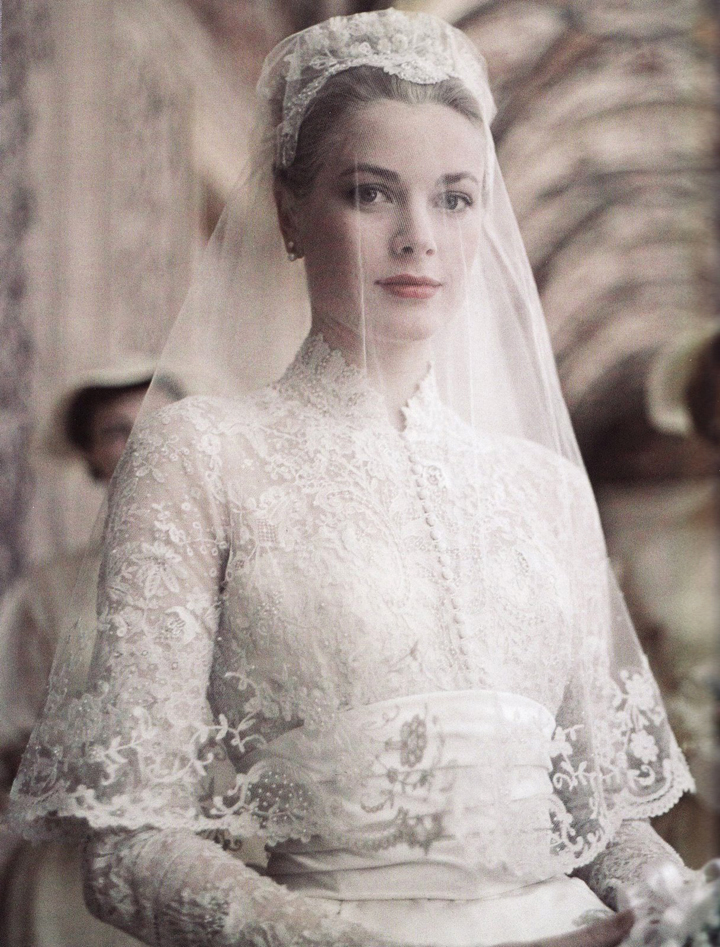 FAMOUS DRESSES: Twenty-five yards of silk taffeta, 98 yards of silk tulle, 300 yards of Valenciennes lace, generous amounts of seed pearls and the seamstresses at the Metro-Goldwyn-Mayer -- all under the direction of Helen Rose, chief designer in MGM's Wardrobe Department.  The result was one of the most talked-about wedding dresses of 1956 -- and for the rest of the 1950s in fact.  By the time Rose created this lacy ensemble, she had two Academy Awards for Best Costumes under her fashionable belt: The Bad and the Beautiful (1952) and I'll Cry Tomorrow (1955).  She would be nominated eight more times during her studio career!  Six years before Kelly's creation, Rose designed Elizabeth Taylor's gown for Taylor's short-lived marriage to Conrad "Nicky" Hilton Jr. in 1950.  Though mostly overshadowed by Adrian -- her predecessor at MGM who created the famed red shoes for The Wizard of Oz among his many accomplishments-- Rose will always be known for this magnificent outfit befitting of Hollywood royalty that was given as a gift to the Philadelphia Museum of Art in 1956.
http://en.wikipedia.org/wiki/Valenciennes_lace
http://en.wikipedia.org/wiki/Grace_kelly
http://en.wikipedia.org/wiki/Helen_Rose
Posted by studio of style at 4:36 PM