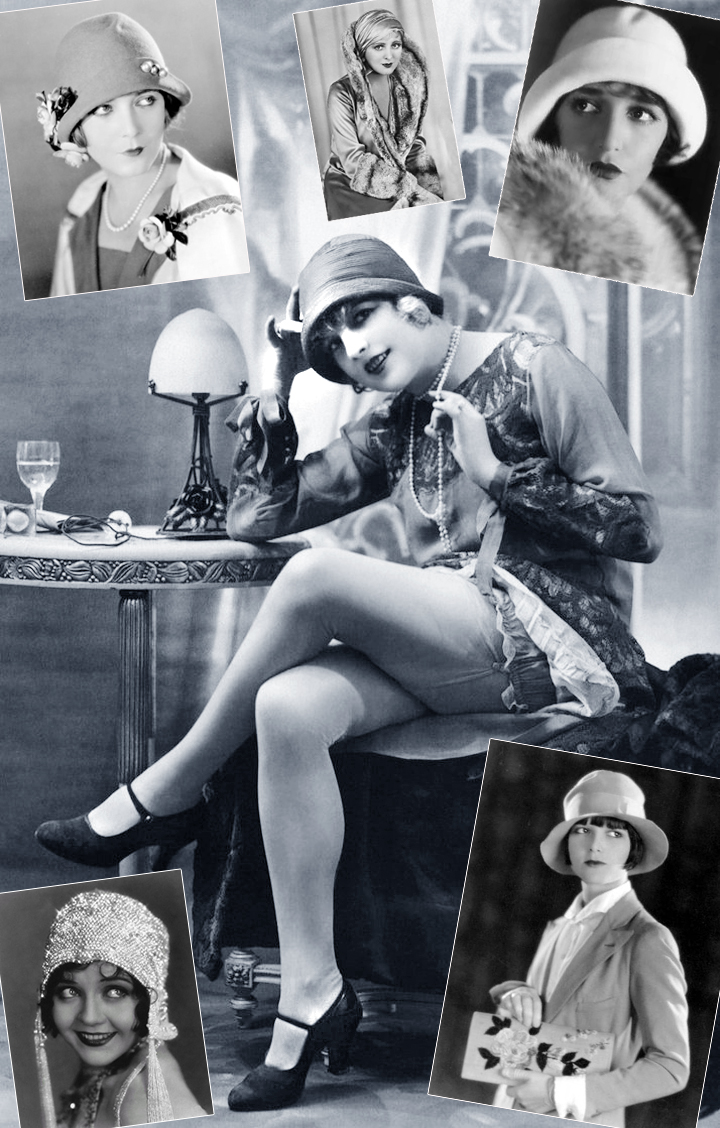 THOSE FANTASTIC FLAPPERS....THE REAL DEAL:  The film "The Artist" was a winner, for sure -- but here at Studio of Style, it was a winner in our estimation for several other reasons.  First of all (and most importantly in our humble opinion) it showed how a bunch of "Hollywood outsiders" could make a film about one of the most important moments in movie  history (the transition from silence to sound), and that it took someone from outside of Hollywood -- French director Michel Hazanavicius who shot the film in Hollywood in seven weeks -- to show the "real" Hollywood just what made Hollywood so great in the first place (are you following all of this?  There'll be a quiz in the morning, you know!).  Secondly, it demonstrated what our beloved silent film queen Norma Desmond (Gloria Swanson in the classic film "Sunset Boulevard") believed up to the last gunshot in William Holden: that all you needed was great faces ("We had faces," Desmond declared with defiance.)  With just music to listen to and facial expressions and body gestures on screen to watch, "The Artist" spoke volumes.  And thirdly, the film's Academy Awarding-winning costume designer Mark Bridges gave us a rich display of outfits that truly spoke of those late 1920s when the fashion world was going through a major shift in shapes, attitude, accessories, materials -- and all with a little bit of gender-bending for the ladies with their new "flat-chested" figures and the desire for boyish hips, boyish faces and short boyish bobbed haircuts (boy oh boy -- what a shift for the "manly" man to get used to -- looking at a lady who wants to look like a boy!). The shoe de rigeur was the "Mary Jane" ankle strap shoe and the absolute must-have accessory was the cloche hat with its turned up brim -- it firmly covered the forehead and made your short hair and bangs all the flatter against your head. The use of the makeup compact in public was all the rage and therefore compacts of the time were highly decorated just for flaunting in public!  The flapper look was universal across all the classes -- which meant that high-society ladies and working class girls could virtually look alike for the first time (prior to this, the upper crust wore heavily worked couture clothing while the rest of the crowd wore "store-bought" clothes made en masse for the masses) -- the flapper look sort of equaled out the classes to a degree, allowing women from all backgrounds to let loose and kick up their Mary Jane heels.  As we told you in an earlier posting (shown below) you can see the costumes from "The Artist" at FIDM in Los Angeles through April 28, 2012 to get a sense of how the clothes looked, hung on the body and were constructed -- even if just for film usage.  The high priestess of the flapper was none other than Coco Chanel who, if nothing else, made clothes that were actually comfortable and easy to put on and take off -- and during those crazy 1920's with all that jazz, dancing and new-found freedom -- that was exactly what the flapper needed to dance the night away and into the new century.
Flapper history: http://en.wikipedia.org/wiki/Flapper
FIDM Motion Picture Costume Design Exhibition: http://blog.fidmmuseum.org/museum/2012/02/20th-annual-art-of-motion-picture-costume-design-exhibition-now-open.html#more
See my Louise Brooks post from last year: http://studioofstyle.blogspot.com/2011/10/gaga-over-lulu-was-style-icon-of-her.html
Main image of flapper from Chloe "Hello Tuesday" at http://hello-tuesday.deviantart.com/
Posted by studio of style at 9:25 PM