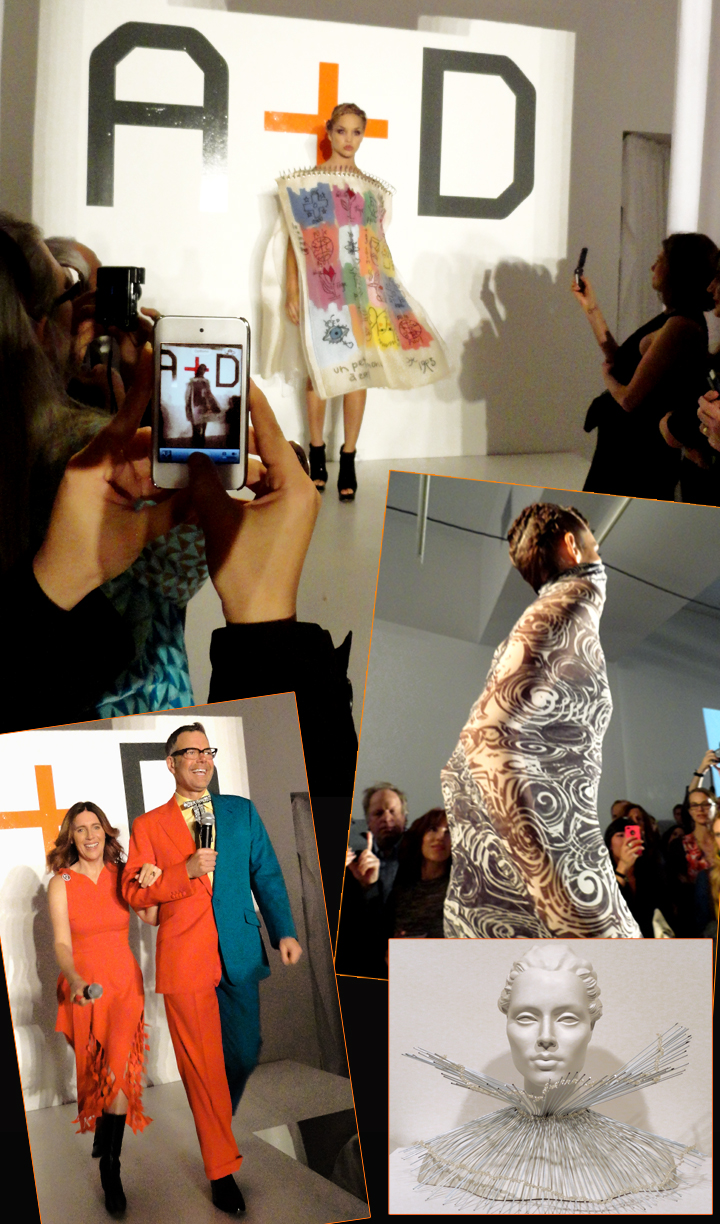 ART + FASHION AT A+D = CELEBRATE: THE WEARABLE -- It could easily be said that L.A.'s most fashion-forward crowd was found at the A+D Museum of architecture and design on Wilshire Boulevard this past Saturday night when dozens of fabulous fashions were on display for auction at the museum's annual fundraiser "Celebrate: The Wearable."  And what a night it was! Wearable creations by such art, fashion, food, design and architectural notables as Trina Turk, Richard Meier, Wolfgang Puck, Karim Rashid, David Hertz and his studio, John Baldessari and Jonathan Adler were among the many who took L.A.'s fashion scene one step closer to the future with a clever mix of materials, shapes, colors and intent.  With a live auction hosted by pop culture humorist Charles Phoenix and KCRW radio personality Frances Anderton (lower left), the event was the town's must-go-to party of the night. "Bloc Notes" by renowned designer Jean-Charles de Castelbajac (top photo) was a colorful play on a spiral notebook, rendered in two layers of crepe and silk. The mummy-like "dress" by BMW Designworks USA (center right) was an instant hit -- the model removed it and placed it over a sculptural armature in the center of the catwalk! The intriguing cantilevered collar by Suzanne Tick (lower right) had the crowd talking the entire evening.  Cameras and iPhones were working overtime trying to take it all in.
http://aplusd.org/celebrate2012
Photos by Greg Firlotte
Special thanks to A+D Museum and dubroWORKS
Posted by studio of style at 12:26 PM