It's About Time: Turning Coffee Cups into Clocks 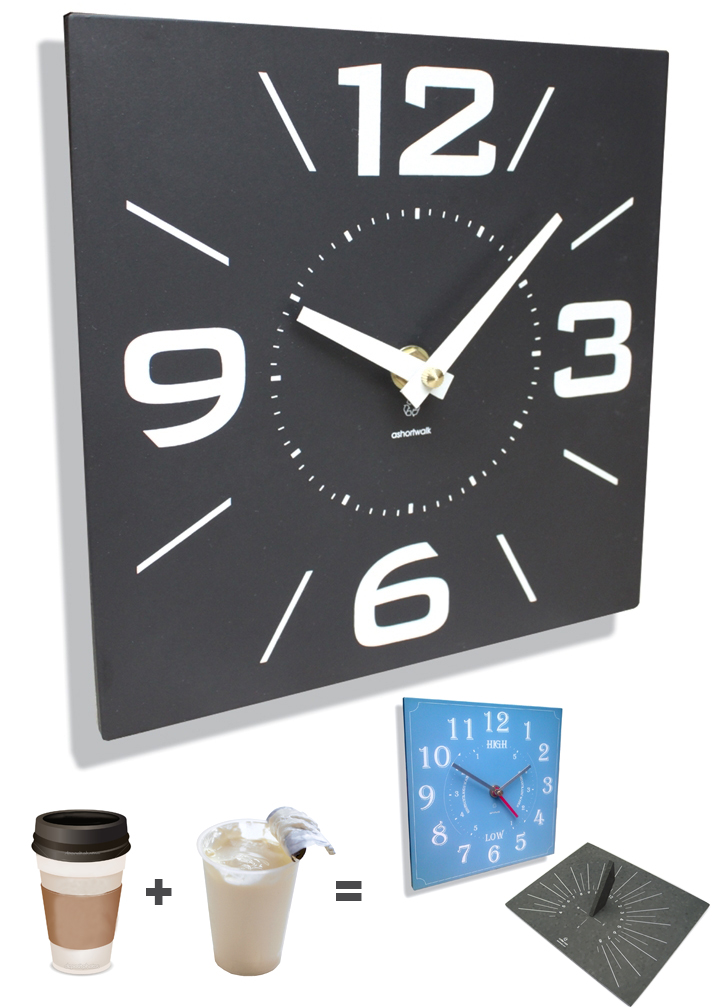 IT'S ABOUT TIME: TURNING COFFEE CUPS INTO CLOCKS -- Most people in Britain (or anywhere else, for that matter) don't think twice about the environment when they discard their plastic coffee cups from vending machines or their yogurt tubs into the trash. But Brit Dan Dicker did think twice -- and even longer than that -- causing him to leave his job as a product designer and inventor at the British technology company Dyson Ltd. and pack off to the picturesque coast of Cornwall so that he could be near the sea, hence the name of his company ashortwalk, i.e. just "a short walk" to the Atlantic Ocean from his base in the seaside town of Perranporth (a former tin mining town now a family seaside resort).  It was here that Dicker (working from a small shed) began to design, manufacture and supply a broad range of useful, functional products geared toward saving the environment by recycling discarded plastic coffee cups and yogurts tubs and transforming them into house clocks, garden clocks, house numbers and signs, coasters and place mats -- as well as clocks that show tidal heights and times, and moon phases.  Pretty clever indeed.  So here's a quick tutorial on how it's done: 1) cups are collected, cleaned and shredded. 2) The shredded materials are heated and injected under high pressure into thin strips, then sliced in small pellets, and now they are ready for a wide range of uses. 3) Under high pressure, thousands of pellets are squashed between two very hot presses. After a short while the pellets have been fused together to form large flat workable sheets.  4) These sheets are then sanded, cut, cleaned and made into the company's clocks and accessories (the material is solid, heavy and feels very much like slate). In 2011, ashortwalk was a finalist in the UK's Green Business Awards that celebrates excellence in green practices, strategies and products; plus the company is a business member of the UK branch of the World Wildlife Fund. Ashortwalk's motto -- "do a little...change a lot" -- has paid off since its founding in 2003: they supply products for companies and retail outlets around the world. So the next time you toss that yogurt tub into the trash, think of how Dicker is making time and saving the health of the planet -- at the same time!  PS -- the "Retro" wall-mounted clock (top) is shown at its size of approximately 8" x 8".
http://ashortwalk.com
Clock images courtesy ashortwalk
Posted by studio of style at 12:19 PM