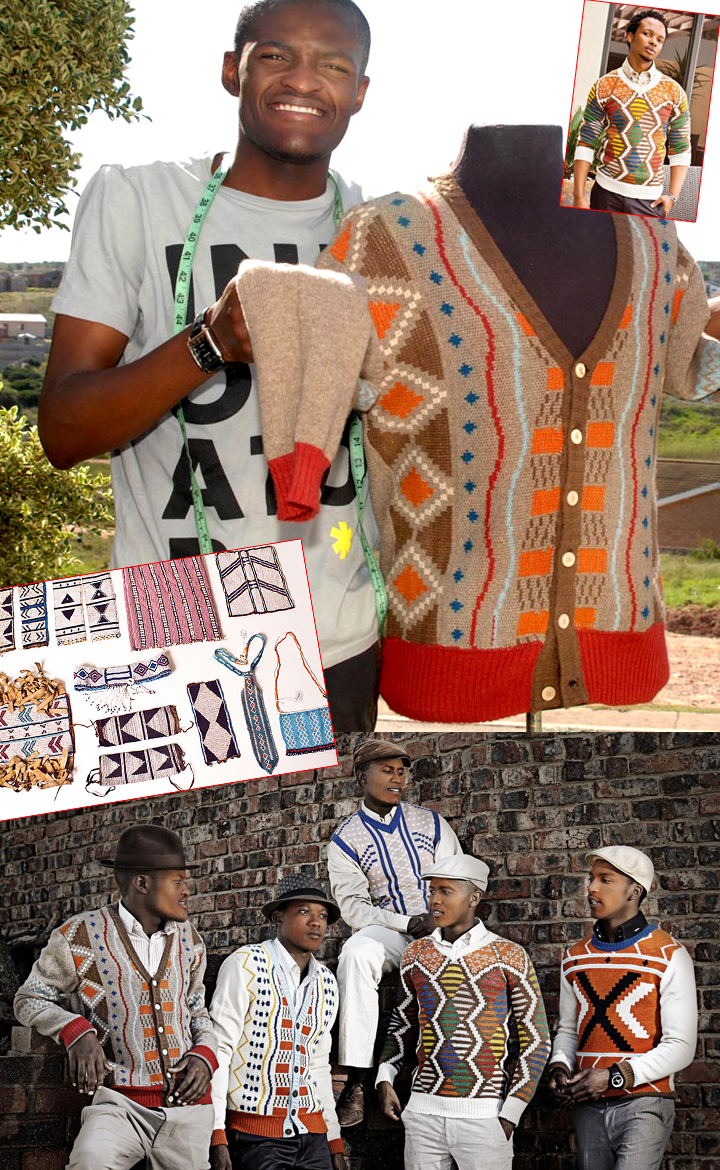 THINK GLOBALLY -- KNIT LOCALLY: LADUMA NGXOKOLO -- At Studio of Style, we love someone who dreams big and acts upon those dreams! Somehow, we hope that our story on the promising talent of Laduma Ngxokolo of the Eastern Cape Xhosa community in South Africa will touch someone out there and perhaps find more outlets for his fabulously stylish knitwear!  The company he started -- MaXhosa Knitwear -- offers both cardigans and pullovers made of 80% marino wool which is hand-spun and dyed in South Africa.  Ngxokolo learned to knit as a teenager (taught proudly by his mother) and the creation of his sweaters came about as the result of the Xhosa tradition of boys between ages 18 and 23 attending circumcision schools where they are put through a manhood initiation ritual -- after the initiation, all their clothes must be given away as a sign of the end of their boyhood -- and the parents must buy the boys new clothes, part of which includes knitwear.  However, Ngxokolo felt no connection to his tribal Xhosa traditions by the clothes he wore during his initiation in 2007 -- and it wasn't until he saw an art exhibition "The Beauty of Beadwork" at the Nelson Mandela Metropolitan Art Museum in Port Elizabeth, Eastern Cape in 2010 that he found inspiration in their intricate designs and began figuring out how to incorporate those beadwork designs into knitwear! Talk about a technical challenge! Outdated software and sewing machinery presented the first of many challenges. But his determination paid off in 2010 when he learned that he was the winner of the Society of Dyers and Colourists award in London -- he found it hard to believe that his sweaters would be seen in England! And later, his knitwear was part of the "Talking Textiles" exhibition at Milan Design Week -- an exhibition that presents innovative uses in textiles.  The video link below shows Ngxokolo presenting his designs at an event called Design Indaba.  Though his website is a bit sparse on information, you can keep track of him in real time (and ask him questions) on his Facebook page.  We at Studio of Style are wishing for lots and lots of good things to come his way and for him to make his distinctive mark in that tough but rewarding global fashion world!  May 2012 be a great year for this truly talented man.
http://www.africanknitwear.com/
Youtube: http://www.youtube.com/watch?v=FvtufR7F308
Facebook:  http://www.facebook.com/pages/MaXhosa-by-Laduma-knitwear/151620224906793
Top photo by Mike Holmes for Weekend Post