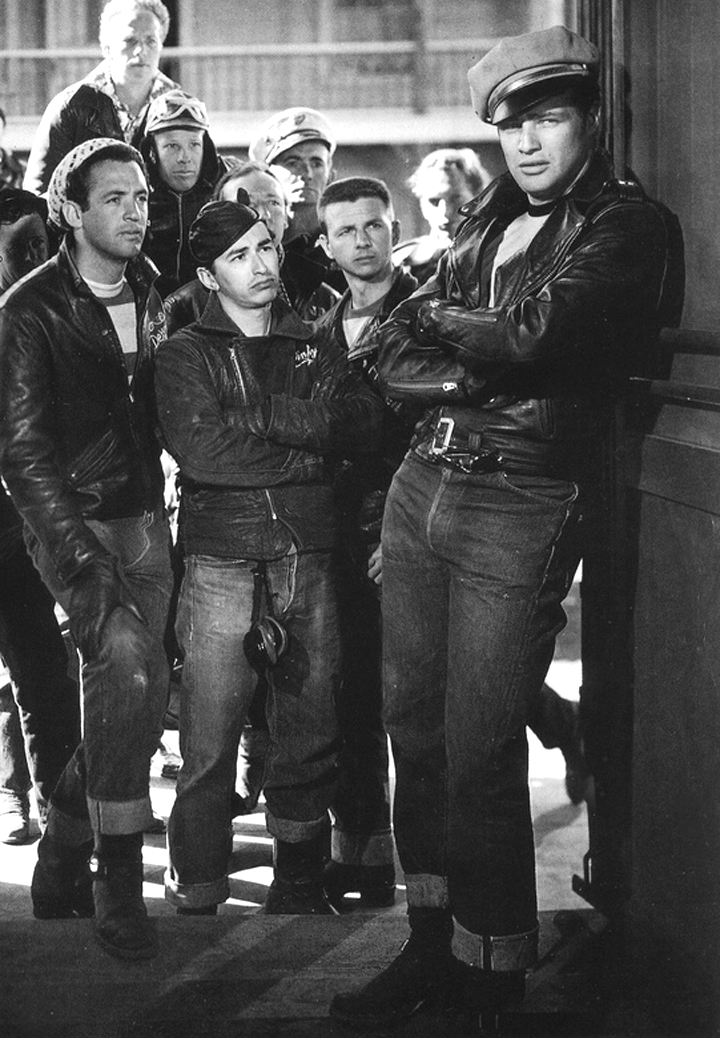 LEATHER, DENIM, BIKERS & BRANDO -- "If you want something from an audience, you give blood to their fantasies -- it's the ultimate hustle," said Marlon Brando.  With his beefcake hustler's body, his manly square-jawed face and his ability to move and posture his body in just the right way, Brando fueled millions of fantasies for both men and women that has lasted for several generations -- not just his own-- when he hit the silver screen in 1953 as the motorcycle gang leader Johnny Strabler in The Wild One.  Though he had already wowed moviegoers and film critics alike as the t-shirted hunk Stanley Kowalski in 1951's A Streetcar Named Desire, it was Brando's hot bod clad in tight jeans, biker's boots, black gloves, a biker's hat and that now-famous black leather jacket (Schott Perfecto #613) that pushed his sexual powers to the limits. (The film was so potent when it was released that it was banned in the U.K. for 14 years (!) because the government thought it would turn its teens into rebels looking to overrun their own quaint English cities and towns with bikers and brawls!) And Brando's character was the perfect outlaw antihero that captivated a growing international teen population looking for their own heroes in the era that included Elvis, rock 'n roll, drive-in movie theaters, James Dean, and anything youth-driven that Hollywood and just about any business could capitalize upon.  Brando was certainly one of those hot commodities that teen boys and girls wanted to emulate (it wasn't all just pink poodle skirts, proms and permed hair!) -- tight  white t-shirts, rolled-up jeans, slicked hair and crewcuts for the boys and ponytails for the girls, sneakers and boots, white socks and -- most importantly -- that cool, outsider stance as embodied by Brando.  His film characters were tough, sensitive, independent and his acting style represented a new style that would also be emulated by others who followed. He was naturally a rebel -- he was expelled from high school for riding a motorcycle through the corridors -- he was put on probation for being insubordinate at a military academy -- and digging ditches during summer jobs for his father gave him plenty of time to build his muscular body and also plant lots of ideas in his very fertile mind of what he really wanted to do with his life.  But the silver screen being the visual medium that it is -- it's all about the look -- and Brando delivered it in spades with his biker persona.  And, kids, if you fancy yourself another "Johnny" and want to cultivate your own following, below are resources on how to recreate the Brando biker look (you'll have to provide your own hot body, of course).  "The only thing an actor owes his public is not to bore them," remarked Brando.  With his yet-to-be-imitated brand of raw male sexuality mixed with stellar talent, boredom is never on our minds when it comes to those heady, youthful days of Marlon Brando.
Jacket: http://www.schottnyc.com/products/men/perfecto/one-star-perfecto-leather-motorcycle.htm
Hat: http://wildrecordsusa.com/fr_motorcyclehats.cfm
Hat: http://baronhats.com/rebel.htm
Boots: http://www.thefryecompany.com/mens-boots/bestsellers/
Button Up Jeans: http://www.levisjeanses.com/levis-501-dark-blue-jeans-74-p.html
Motorcycle gloves: http://www.leatherup.com/c/Motorcycle-Gloves/2/162.html
Posted by studio of style at 6:42 PM