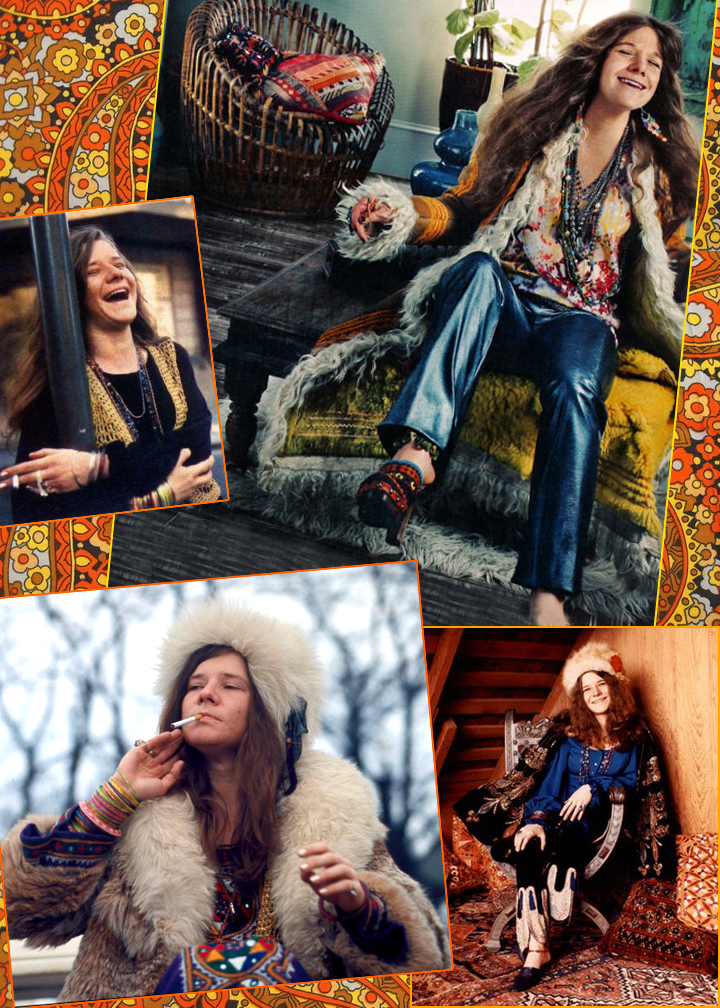 NEVER COMPROMISE YOURSELF: JANIS JOPLIN -- "Don't compromise yourself. You are all you've got," singer Janis Joplin once said. And if anything can be said about this most original of style originals, this would be it.  We're gonna skip all the cliches, the stuff about the drugs, the booze, the ups and downs -- it's all been said and you pretty much know the drill anyway, kids.  Joplin always referred to herself as a "beatnik from Texas" -- you have to know your history, okay, so keep in mind that she came from the beatnik era of the 1950s and early 1960s that was actually the era of the Beat Generation (a phrase introduced by writer Jack Kerouac in 1948 that symbolized the anti-conformist youth movement centered in New York -- and Joplin was a beatnik poet and folk singer in the early 1960s). From the get-go, while in college at the University of Texas in Austin, the campus newspaper in 1962 wrote an article on her "She Dares to be Different" in which they say: "She goes barefooted when she feels like it, wears Levi's to class because they're more comfortable, and carries her autoharp with her everywhere she goes so that in case she gets the urge to break into song it will be handy. Her name is Janis Joplin." And that was before she hit the streets of San Francisco in 1963 just as another youth movement was gathering steam that would later be termed "hippies" (this word was first used in print in 1965 by writer Michael Fallon who described "a new generation of beatniks" who had moved into the Haight-Ashbury neighborhood of San Francisco -- i.e. hipsters (a 1940s word) who were now "hippies"). The hippies never called themselves that, nor did they call themselves "flower children" or any such stuff -- it was all from the media at first. So you see, Joplin was already a free spirit when she landed in San Francisco -- there was no such thing as the "Janis Joplin look" before she arrived -- she was it already. All one needs do is to study the photos of Joplin and just marvel and scrutinize all the layers upon layers of colors, textures, materials, shapes, ornaments, jewelry, various hair adornments and hats, feathers, beads, frills of all kinds, ethnic everything in excess -- and that was just the exterior! Inside her, there was something even more freer that we can ever imagine -- especially for the time in which she lived. And she lived the motto of the hippie movement -- in that love was free and meant to be shared with everyone; that everyone was equal and free to express themselves however they wanted as long as no one was put down, suppressed or belittled for wanting to be different (as the popular culture would put it, for the hippies saw themselves as normal in their beliefs and the rest of the American culture to them was abnormal for not wanting to embrace the higher ideal of love and fellowship with all peoples and beliefs -- especially Eastern religions and philosophies).  For Joplin, she was the way she wore: colorful, all encompassing, all inclusive.  Yes, her voice was the medium by which she reached the masses, but it was ultimately the way she presented her visual self that informed those masses that it was okay to dress in clothes other than what came from a Sears mail-order catalog (at the time, Sears was probably the most-ordered-from source of clothing in America -- and later on, even they would adopt hippie-inspired clothing as the youth movement garnered a greater acceptance nationwide and everyone from clothing manufacturers to Hollywood studios was anxious to cash in).  So there you have it, kids! Style is what you make it -- and Janis Joplin was a true style maker -- never equaled, nor duplicated since.
http://www.janisjoplin.com/
http://en.wikipedia.org/wiki/Janis_Joplin
Photos from various sources from the internet. /  Jill, Jeannie and Sabine -- this one's for you!
Fashion designer Diane Gilman is also acknowledged for dressing the great '60s stars including Joplin, Hendrix and the Doors and Jefferson Airplane.
Posted by studio of style at 10:06 PM