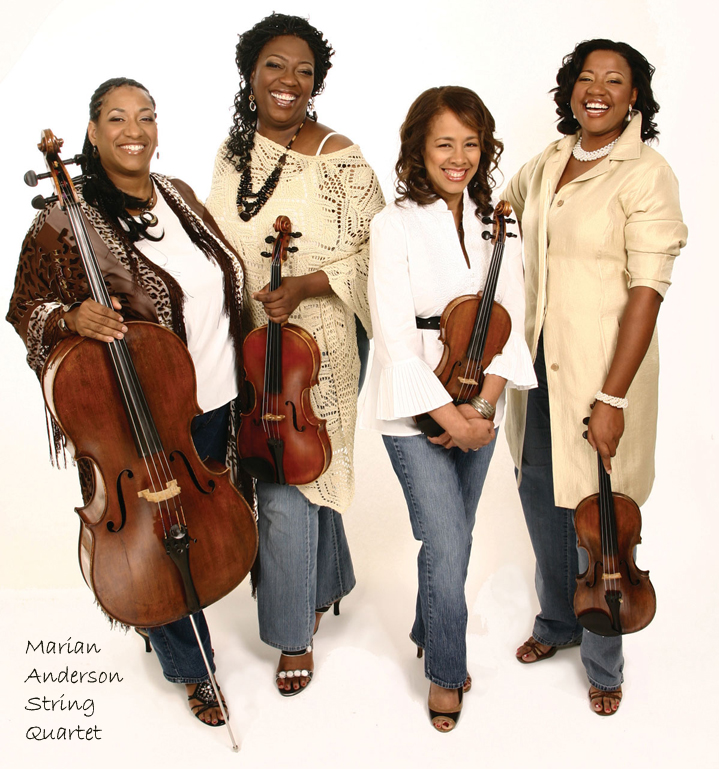 CHANGING THE MUSICAL LANDSCAPE: THE MARIAN ANDERSON STRING QUARTET -- They're coming to town -- and we want to give you plenty of time to clear your schedule, get out of your musical rut and be part of an experience that may very well change your outlook on classical music -- and musical stereotypes in general, okay? Performing chamber works by American, Latin American, and European composers on Friday, March 2nd in the intimate setting of Herrick Chapel at Occidental College in Greater Los Angeles, the Marian Anderson String Quartet (MASQ) is one of those rare musical ensembles that is more than just about the music.  Named for one of the greatest and most underrated American contraltos of all time -- the late Marian Anderson -- the quartet, founded in 1989, has performed in hundreds of churches, libraries, museums, soup kitchens and prisons -- not to mention New York's Alice Tully Hall and Washington D.C.'s Kennedy Center, to name but a few prestigious venues.  In the photo shown above, they are (from left to right): Prudence McDaniel; Diedre Lawrence; Maryanne Henry; and Nicole Cherry -- four ladies who have backgrounds in diverse musical genres and have individually performed in venues spanning the globe. The March 2nd program in Los Angeles consists of works by Argentinean composer Astor Piazzolla; a string quartet by an 18-year-old Felix Mendelssohn and pieces by African-American composers William Grant Still and Coleridge-Taylor Perkinson.  Collectively, they are driven by their belief in the power of education and have performed for children all across America under the auspices of various organizations and grants. Though the MASQ may not as well known or supported as other quartets in the classical realm (the Emerson String Quartet, the Guarnari Quartet or Kronos Quartet, for example) this does not take away from the heart and soul that these four ladies pour into every performance to make their music -- and their message -- heard.
http://www.marianandersonstringquartet.com/
March 2nd Concert in Los Angeles:  http://www.oxy.edu/x12166.xml
Shostakovich String Quartet in C minor:  http://www.marianandersonstringquartet.com/wp-content/uploads/2010/02/Dimitri_2ndmov.mp3
Posted by studio of style at 10:30 PM