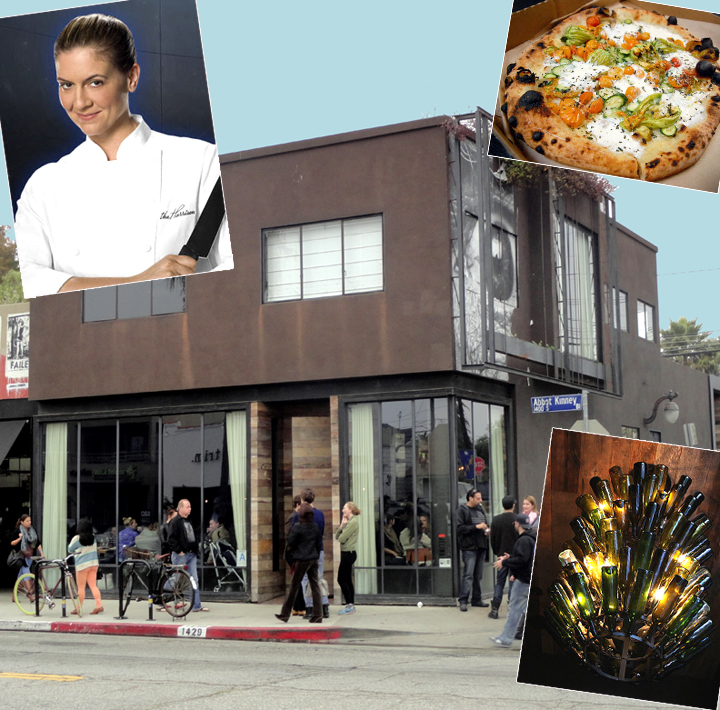 AMANDA FREITAG TELLS STUDIO OF STYLE -- Without a doubt, superstar chef Amanda Freitag has always been one of our favorites here at Studio of Style -- in fact, we almost go into shock if she's not one of the judges on the weekly hit Food Network show Chopped where we get to see her sample, pick at, savor or reject food served up by four chefs competing for a cash prize. And, naturally, we were cheering her on during The Next Iron Chef competition and, naturally, were heartbroken when she was eliminated....oh well...the life of a superstar chef! So you can imagine, kids, that we were truly curious about what this New Yorker's taste buds had to say about the L.A. restaurant scene -- and we asked her to tell us her favorite spot in L.A.  Well, being the diplomatic lady that she is, Ms. Freitag told us that one of her favorite eateries is Gjelina on that oh-so-trendy Abbot Kinney Boulevard in Venice (shown above) -- and we can certainly understand why. With more than one thousand reviews on Yelp (!!), you know that something is definitely going on there!  Let's put it this way, the restaurant has its fans and its detractors as well as those still sitting on the culinary fence (on one occasion, Gordon Ramsay was shocked and fuming when his then-pregnant dining partner Victoria Beckham (!) was refused the request to have the dressing for a smoked salmon salad served on the side! No changes and no substitutions -- so don't even ask, kids!!).  So many stories -- so little time to eat everything!  But that hasn't stopped the steady stream of mostly reservation-only diners from seeking their own experience at this wood-decor-heavy, California beach vibe eatery -- mostly for the sake of being able to say that they ate there! You're in luck if you don't have reservations and are contented to bring the food home or to the beach located a block away -- Gjelina Take Away is right next door to the restaurant and you can sample a number of sandwiches, salads and pizzas -- all with some very unusual (translate foodie trendy) ingredients that also have both fans and detractors!  Let's put it this way, kids: you can't like everything and you can't have it all.  So, do what we do here at Studio of Style -- we enjoy everything for what it is and we have a good time while we're doing it!  And we love eating our take-away Gjelina food while sitting in front of the TV watching Amanda (and her cohorts) crowning the next lucky Chopped champion!!!
http://www.amandafreitag.com/
http://gjelina.com/
Amanda Freitag photo courtesy of the chef!
Restaurant exterior photo by Greg Firlotte
Posted by studio of style at 4:53 PM