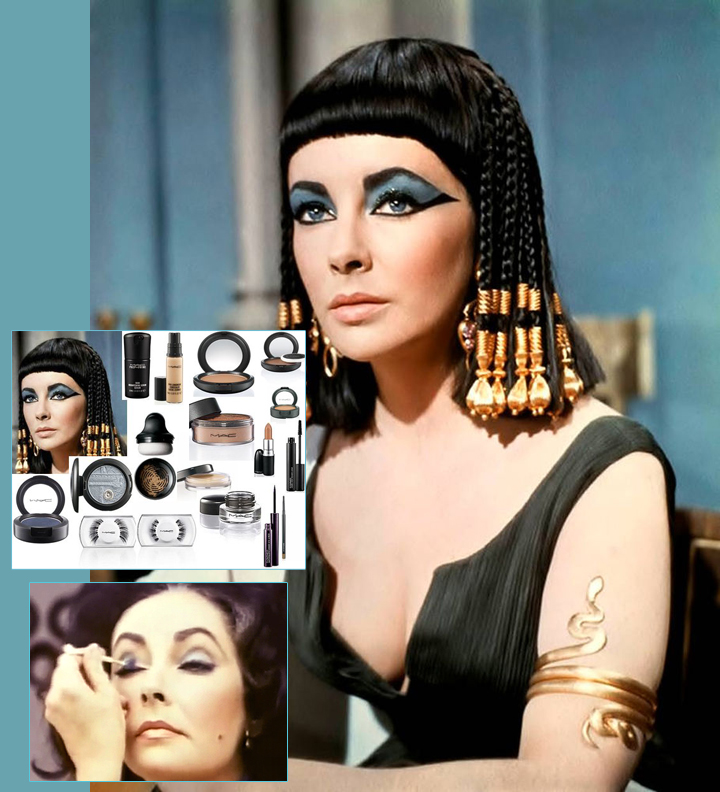 SHE'S GOT CLEOPATRA EYES: ELIZABETH TAYLOR -- “I really don’t remember much about Cleopatra. There were a lot of other things going on," Elizabeth Taylor would later say about the history-making 1963 film Cleopatra -- and was she ever right about that one!  The "other things" that were going on were her notorious love affair with co-star Richard Burton and a viral illness while shooting the film that practically ground production to a halt -- almost bankrupting 20th Century Fox studio along the way, but still going on to win four Academy Awards for cinematography, costumes, art direction and visual effects.  But never mind all that, kids!  All we really took away from the film was that fabulous eye makeup that has never been duplicated on a film star since!  Yes, the real Cleopatra (see story below) wore lots of makeup in her day (both men and women wore lots of heavy applications of lead-based black and green powder around their eyes that was believed to have a magical role in protecting its wearer from illnesses, thanks to the gods Horus and Ra -- who knew??).  But our Ms. Taylor made the ultimate statement with her eye makeup thanks to makeup artist genius Alberto de Rossi (not to mention hair stylist Vivienne Zavitz and costume designer Renie who whipped up Taylor's psuedo Egyptian/cocktail hostess outfits that bore little-to-no resemblance to ancient reality -- but, hey, who noticed?).  As long as Taylor was on the screen, it seemed that no one could take their eyes off her eyes.  So if you want that much attention (and who doesn't?), here is a link to a tutorial on how to apply all that colorful makeup (minus the lead!) and there's also a video showing Taylor herself applying makeup in the 1974 film The Driver's Seat -- and she does it so fast and so effortlessly too.
How to get the look: http://glamourdaze.blogspot.com/2011/04/elizabeth-taylor-cleopatra-eyes-simple.html
Watch Liz apply her makeup: http://www.youtube.com/watch?v=7iTrw4kr8e0
Alberto de Rossi: http://www.imdb.com/name/nm0211275/
Posted by studio of style at 3:09 PM