Turning Stars....into Stars! The Genius that was Kevyn Aucoin 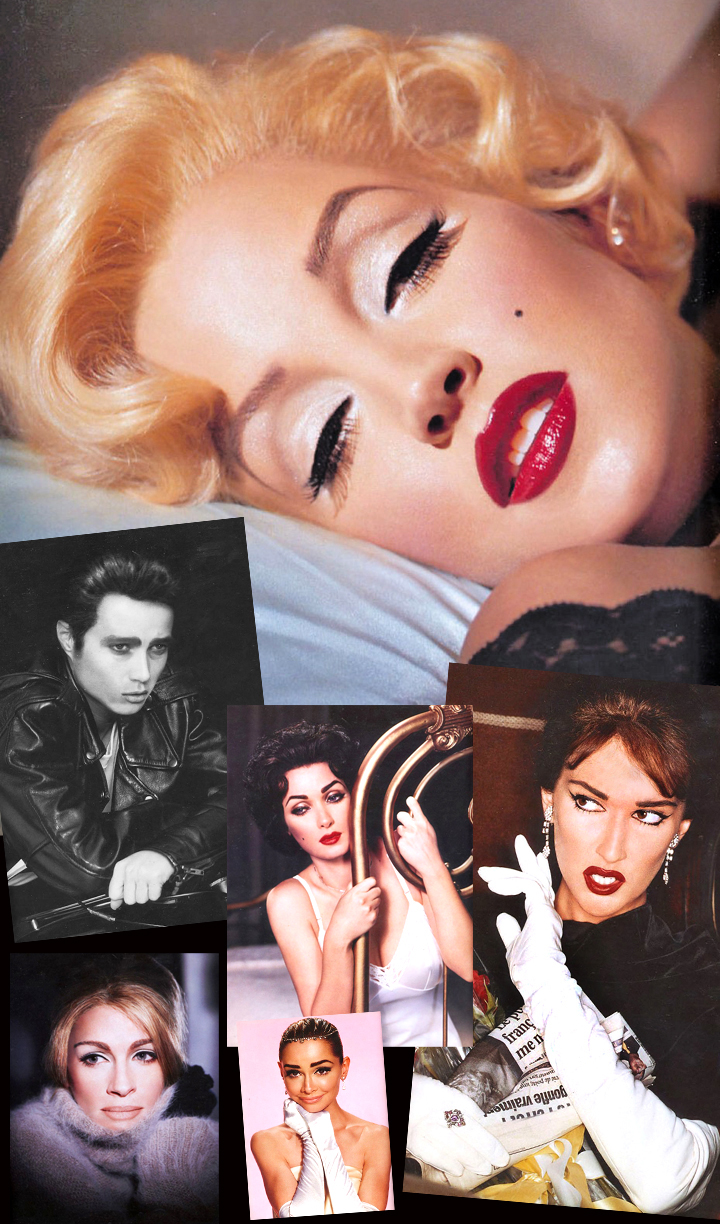 TURNING STARS....INTO STARS! THE GENIUS THAT WAS KEVYN AUCOIN -- You gotta love that crazy world inhabited by the celebrity!  'Cos just when they think they're a big star, there's always a star even bigger looming over them -- doncha just love it?  So we're gonna play a guessing game -- which we at Studio at Style just love to play (especially when it comes to blind items, gossip and who's "seeing" who in Hollywood!).  Can you figure out who's impersonating a bigger star than themselves in the photos above?  Let's start with Marilyn Monroe (shown at top). Who's portraying her in this fabulously-styled pic? Well...she's the daughter of a King...and she married another King (not many people can say they've done that!).  And what about that rebel with a cause James Dean (shown above left)? Let's see...the person portraying Dean here was once engaged to a major Hollywood hunk (and we mean major!) and later married the lead singer of one of the hottest international bands today!  And we all know that Elizabeth Taylor (above center, as seen in "Cat on a Hot Tin Roof") had a lifelong penchant for the most amazing clothing and jewelry.  And in a strange, very strange way, so did the lady shown here portraying Ms. Liz -- but our mystery poser had her felony charges reduced to misdemeanors -- and she stayed on probation until December 2005!  We have always loved the opera diva Maria Callas (above, right) -- and the lady portraying her in this photo also doesn't usually share the spotlight with anyone -- such is her power as a first lady of song!  And then there's the eternally beautiful actress Julie Christie (lower left) who radiated throughout the entire film Doctor Zhivago.  Our mystery poser radiated as well in a famous red dress in one of the most popular films of the 1990s which made her a household name!  And where would we be without the fragile beauty of Audrey Hepburn (bottom, center) -- and an equally fragile actress shown here strikes a classic Hepburn pose! So who are these mystery imposters??? Before we reveal their identities, we have Kevyn Aucoin to thank for creating these marvelous portrayals -- as seen in his book "Face Forward" from 2000 (one of four books he wrote on the art of makeup).  Perhaps the most famous of all makeup artists of our time, Aucoin's work was true genius.  During the 1980s his work blossomed from boy-from-Louisiana to the most sought-after makeup artist in fashiondom -- doing work for Vogue (who discovered him) to Harper's Bazaar, Allure, Vanity Fair, Marie Claire, Mademoiselle, InStyle and so many more -- and not to mention creating beautiful faces for the top A-list celebrities in show business (he did Cindy Crawford for her first Vogue cover -- and he did Gwyneth Paltrow's makeup the night she won an Academy Award -- and he was one of Oprah Winfrey's favorite makeup artists!).  "Life is too short to spend hoping that the perfectly arched eyebrow or hottest lip shade will mask an ugly heart," Aucoin so brilliantly noted.  He knew only too well that beauty came from within; that his artistry only enhanced and brought out what was already there, but we all knew that his work was truly transformative -- which is what "Face Forward" and his other books were all about! So, now let's name names and reveal the identities of the celebrities shown above, okay?  Did you guess Lisa Marie Presley as Marilyn Monroe??  Wow--we love that one, for sure!  Or Gwyneth Paltrow as James Dean?  Ha!  Got ya there!! Or Winona Ryder as Elizabeth Taylor? Or Celine Dion as Maria Callas?  Or Julia Roberts as Julie Christie?  Or Calista Flockhart as Audrey Hepburn?  Pretty cool, huh?  Before Aucoin passed away all-too-young in 2002, he had changed the world of makeup, taking it to new and beautiful artistic levels.  His signature collection of products -- Kevyn Aucoin Beauty -- continues the legacy begun in childhood: a boy in love with making people look and feel beautiful, who took this love to the world and made it a more glamorous place for all us devotees of style!  We'll leave you with this quote from Aucoin, "To forgive yourself your differences and cherish them instead is incredibly liberating." Fabulous!!
http://www.kevynaucoin.com/
http://www.amazon.com/Face-Forward-Kevyn-Aucoin/dp/0316286443
Images courtesy Kevin Aucoin Beauty
Posted by studio of style at 11:24 AM