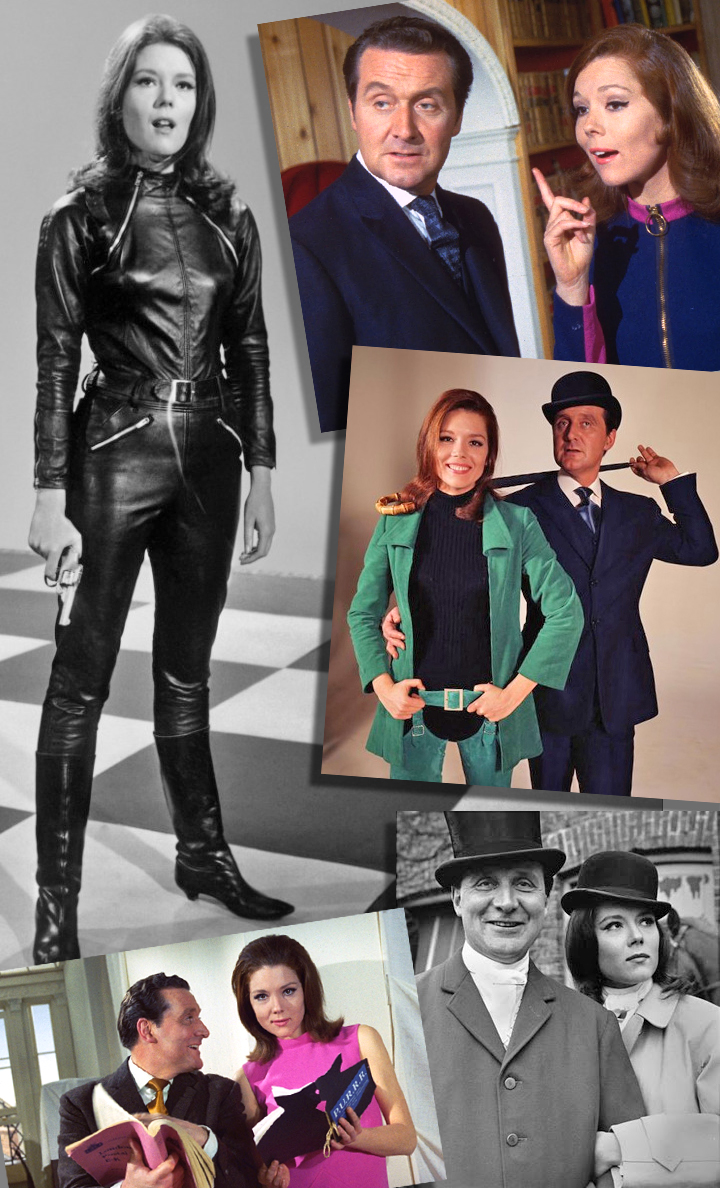 MRS. PEEL...WE'RE NEEDED! THE AVENGERS TV SHOW -- When suave, debonair (and always the gentleman!) John Steed -- portrayed by British actor Patrick Macnee -- called out that timeless appeal: "Mrs. Peel...we're needed" to his fellow crime fighter, the ever-lovely Mrs. Emma Peel -- portrayed by fellow Brit Diana Rigg -- we knew that all of us in TV land were in for a rollicking good time through merry ol' England!  From 1961 to 1969, millions of devotees of crime and British style (yes!) were glued to their TV sets (that what they used to be called!) for The Avengers, the longest continuously-running espionage show that mixed science fiction, fantasy, surrealism and lots of eccentric British charm from days of yore into a show that has never had an equal since. Macnee provided the perfect anchor with his dashing character -- with three lovely ladies (Honor Blackman, Rigg, and Linda Thorson, in succession) who were tough and beautiful in equal measure. And he was always perfectly tailored from head to toe in his Saville Row suits, bowler hat and that British necessity, the umbrella (which served many purposes, of course!). Did you know that The Avengers was the first British series to be aired during prime time on U.S. television -- for a groundbreaking $2 million for 26 episodes?  Yes, indeed, kids!  That's how popular it was back then.  When Rigg jumped aboard in October 1965 (replacing Blackman), she was an instant hit with the fans -- and who could resist her?  Rigg and Macnee were the perfect TV partners, bringing a rare chemistry to their roles that made the TV screen almost too hot to touch!  Swingin' London was in high gear in the mid-sixties -- and Rigg's mod, mod world outfits exemplified the era perfectly. Along with Rigg in 1965 came the show's new theme song written by Laurie Johnson, which has become one of the most recognized (and beloved) theme songs of all time -- every time we at Studio of Style hear it, we want to pop a bottle of bubbly and go in search of action and adventure! Today, Macnee is a youthful 90 years old and lives in the warm glow of the Southern California desert.  As for now-74-year-old Rigg, in 1994 she was made a Dame Commander of the Order of the British Empire (DBE) by Queen Elizabeth II for her long contributions to theater and film.  Together, Macnee and Rigg have made an unforgettable contribution to the happiness of millions for their many theatrical and film roles -- and for their unforgettable style!  John Steed and Mrs. Peel....you're always needed at Studio of Style!
http://patrickmacnee.com/
http://en.wikipedia.org/wiki/The_Avengers_(TV_series)
Posted by studio of style at 5:58 PM