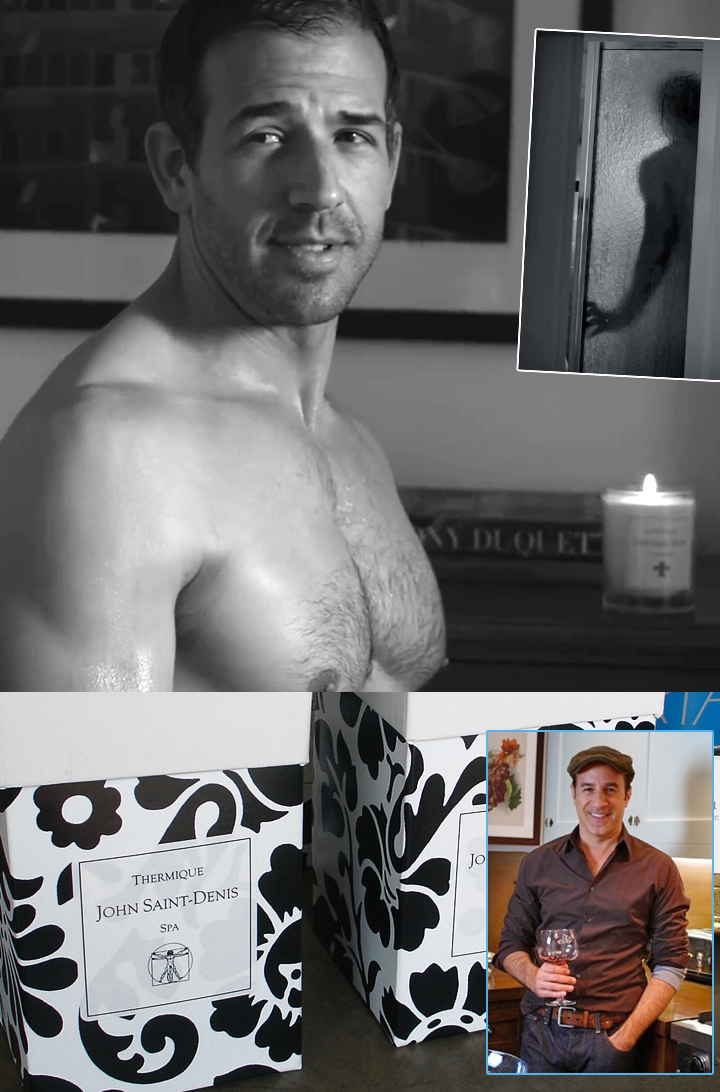 HOT STUFF! NEW CANDLES...AND VIDEO...FROM JOHN SAINT-DENIS -- We don't know what's hotter -- the four new candles from L.A.-based design professional John Saint-Denis (lower right photo)...or the video (top photos) that he just launched to promote it!  And yes, we're being a bit naughty showing you a bit of the shower scene.  And yes, he steps out of the shower.  And yes....there's more!  Well...it's all actually very nice in the end....because there are four distinct scents to choose from.  First of all, there's "Thermique" (Spa) with its blend of citrus, daisies, musk and marine salt -- for a cleansing spa experience, inspired by the thermal baths of Northern France, where Saint-Denis' family roots began (more about that in a second!). And then there's "La Provence" (Lavender) that truly evokes those lavender fields and the simple, handcrafted soaps from the south of France (our favorite part!) filled with color and sunshine.  Next up is something truly unique "La Cheminée" (Fireplace) which is an amazing recreation of that heady, smoky scent from those immense roaring stone fireplaces found in chateaux in the Loire Valley of France where Saint-Denis studied as a child one summer long ago. And then there's Studio of Style's favorite "L'Eglise" (Frankincense) -- an exotic communion of frankincense, sage and myrrh that conjures up visions of the East and the West -- and not surprisingly inspired by Saint-Denis' service as an altar boy in a French church in New England.  You see how the smells experienced by one's youth are so powerful that they last a lifetime? Saint-Denis brings these wonderful memories to these candles (they burn for 100 hours and are comprised of essential oils and soy wax).  Studio of Style stopped by the Gina Berschneider showroom on La Cienega Boulevard yesterday in Los Angeles to sample these scents -- and you should too when you're in the area!  Saint-Denis brings more than 20 years of experience in the worlds of marketing and consumer goods to his own furniture lines, and now candles. His father is French and his mother is from Italy's Amalfi coast -- so you can imagine the influence his heritage has had in his upbringing -- having lived and studied in Paris, Lyon and Italy -- hence the French names of his candle collection.  The art film (directed by Nino Mancuso and starring Peter Calandra) showcasing these candles is meant to stimulate the senses as much as the candle scents themselves -- which is a combination that we at Studio of Style never tire of -- and we mean never!  So, light up your life with these candles from Saint-Denis and create a movie moment of your own! And who knows, we just might feature your film on Studio of Style too!
http://johnsaint-denis.com/
Gina Berschneider: http://www.gbfurniture.net/accessories/objects/john-saint-denis-candles
Images courtesy John Saint-Denis / Candle photo by Greg Firlotte