Donna Summer: Forever the Queen of Disco...and our Hearts! 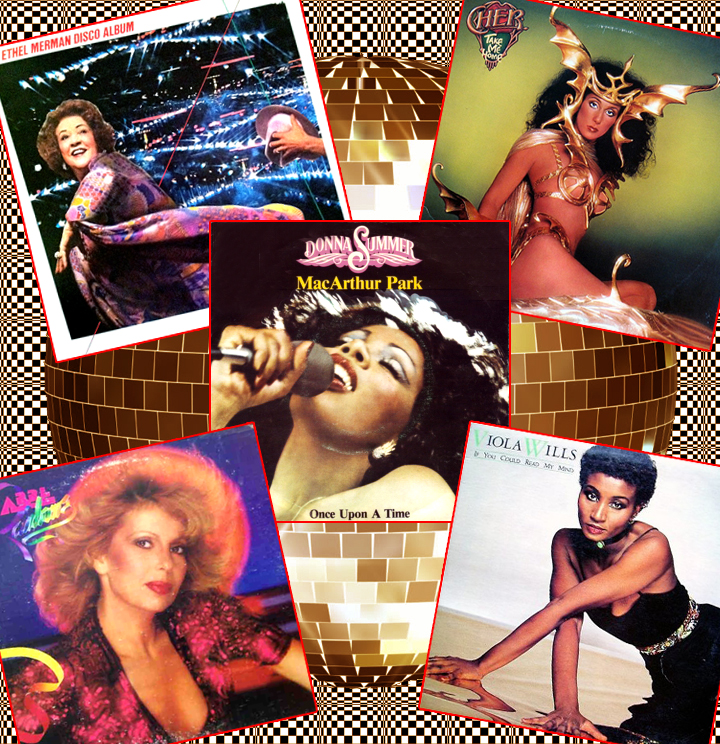 This is a post that we did back in February -- so we thought we'd bring it back in memory of that wonderful First Lady of Disco: Donna Summer

DISCO DAZE PART II: QUEENS, CAMP & COVER SONGS -- By popular demand, kids, we've dug deep into our dusty vaults and uncovered a mixed bag of disco delights (and then again, maybe not!) for your aural pleasure (you like that, don't you??). As with any musical genre, hits and misses abounded in the disco world -- so let's begin with an item that qualifies as probably the single biggest misstep heard on any dance floor, anywhere (but we're gonna be easy on the gal, okay?).  The queen of Broadway song-belters -- Ethel Merman -- will always be immortalized by such trademark songs as "Everything's Coming Up Roses" and "There's No Business Like Show Business" -- but, unfortunately, no one had any business producing (much less releasing) Merman's disco album.  Her heart was certainly in the right place -- seeing as how everyone was jumping on the disco bandwagon back then and Merman was so adored by the gay club-goers that it seemed as if the concept would be a slam dunk.  However, the tacky (and we've never used that word here!) arrangements simply sunk every tune to the depths of the Hudson River.  In fact, the songs actually cleared the dance floors almost every time they were played (and that's a feat in and of itself in any gay club!) -- but Gold bless her, Ms. Merman sang her heart out and we'll let you be the judge when you hear that Broadway chestnut "Everything's Coming Up Roses" a-thumpin' and a-bumpin', okay? Speaking of musical chestnuts -- Abbe Lane (that glamorous 1950s singer/actress who was voted "too sexy" to appear on TV and was "forced" to cover up parts of her voluptuous body!) took a crack at that timeless tearjerker "Somewhere Over the Rainbow" and transformed it into a dance floor hit in 1980 on her "Rainbows" album that had other disco hits as well as remakes of some of her familiar tunes.  Cher -- oh dear -- where do we begin?  Naturally she, too, climbed upon the mirrored ball and came up with the hit "Take Me Home" -- but what would Cher be without those costumes that defy description (we'll try, okay?).  The peekaboo Flash Gordon-meets-Viking Valhalla outfit is probably what really sold this LP, because it really didn't fare too well for the all-disco-driven Casablanca record label and it appeared Cher was "gently persuaded" to go disco (a phase which didn't last long for the highly independent Cher) as she was ready just to rock out instead!  The LP cover is constantly on the "worst" list of many a record cover aficionado.  We can't recall any folk song that made it to the disco dance floor -- but Gordon Lightfoot's classic tune "If You Could Read My Mind" sounded so natural with a disco beat that even grandma loved it!  And the version served up by Viola Wills (who passed away in 2009) is so classy -- just like the lady herself!  Many of the disco kids were too young to remember Gordon singing it, so Wills' version was taken by many as a product of the disco era without any problem!  And now, kids, the moment you've been waiting for! The winner is.......Donna Summer the all-time queen of disco (and our hearts!) with her over-the-top, going-for-the-gold 1978 version of "MacArthur Park"!! First released in 1968 by actor/singer Richard Harris (best known for playing King Arthur in the 1967 film "Camelot"), this former hit on the pop charts became a dance floor mega-hit -- sung ever so brilliantly by Summer at what some would say was the perfect peak of her amazing voice (and it still is!). It went to #1 on the Billboard Hot 100 -- and rightfully so!  Perhaps no other disco song has ever been so lushly produced, reaching one musical climax after another and sending club-goers into a kind of heavenly ecstasy during its 18-minute musical medley which included two other songs in the center of it all.  So there you have it, kids!  In our next installment, it will be the guys turn-- and, oh boy, we'll have some fun with that one, okay?  Until then, keep dancing!
Ethel Merman, "Everything's Coming Up Roses" -- http://www.youtube.com/watch?v=dYQiLQgJ18U
Abbe Lane, "Somewhere Over the Rainbow" -- http://www.youtube.com/watch?v=UC7SsObRv-g
Cher, "Take Me Home" -- http://www.youtube.com/watch?v=eJ7Y4rfFcYw
Viola Wills, "If You Could Read My Mind" -- http://www.youtube.com/watch?v=bzpqwvz5HJY
Donna Summer, "MacArthur Park":
Studio -- http://www.youtube.com/watch?v=n3rEzI0PtPA
Live 1978 -- http://www.youtube.com/watch?v=p1kPkCOXE2c
Posted by studio of style at 6:50 PM