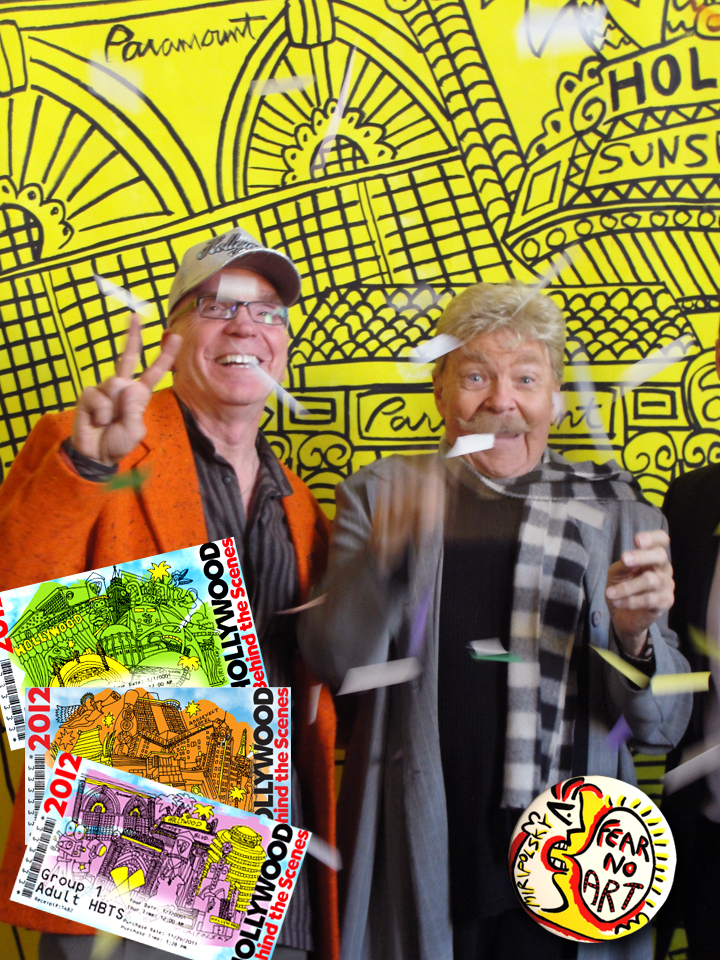 YOUR TICKET TO HOLLYWOOD: Andre Miripolsky & Red Line Tours! -- Confetti was flying all over the entrance to the famed Egyptian Theater on Hollywood Boulevard yesterday in celebration of a new series of collectible souvenir tickets created by renowned Los Angeles artist Andre Miripolsky for Red Line Tours Hollywood Behind the Scenes walking tour of historic Hollywood!  Legendary comedian Rip Taylor (above right) is shown here with Miripolsky (looking snappy in his orange jacket!) who showered the glamorous, star-filled crowd (see more postings below!) with his trademark confetti and hilarious one-liners!!!  Red Line Tours asked the artist to create three different tickets that depict such showbiz icons as the Capitol Records building, Grauman's Chinese Theater, the Hollywood Bowl and the famed gates of Paramount Studios.  Behind the Scenes is a 75-minute walking tour founded by Tony Hoover that dispels myths, shows hidden hideaways (gotta see those!) and takes patrons inside venues generally restricted to the public (we love that insider touch!!).  And did you know that they use a live, state-of-the-art adjustable audio system that allows patrons to hear the tour guide up to 300 feet -- regardless of the surrounding traffic noise?  No better artist than Miripolsky could have been chosen!  He is the quintessential L.A. artist who brought to the art world his now-famous "Fear No Art" button (shown here) and created the phrase "Viva L.A.!" which has become unofficial official mantra for the City of Angels. His bright colors and energetic paintings and drawings reflect the light-filled, non-stop pace that is distinctly L.A. -- and he's one of the nicest people we've ever met too! The two postings below show some of the wonderful celebrities that joined Miripolsky and Red Line Tours in saying "Hooray for Hollywood!" and sharing their passion for this crazy place called Tinseltown that we all love so much!
http://www.miripolsky.com/
http://www.redlinetours.com/
http://www.riptaylor.com
Photo by Greg Firlotte
Posted by studio of style at 5:20 PM