From One Superstar to Another: Edie & Phyllis 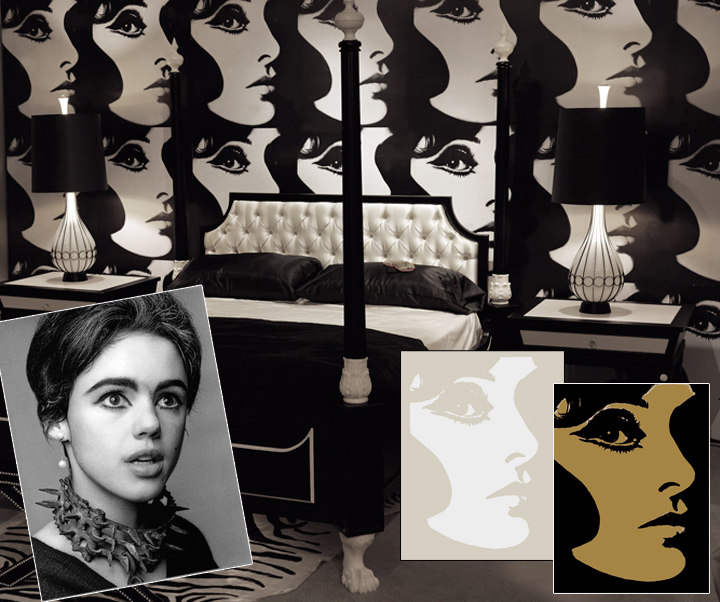 FROM ONE SUPERSTAR TO ANOTHER: EDIE & PHYLLIS -- The year was 1964 and Pop Art was in full swing: New York was exploding with the new, colorful works of Claes Oldenburg, Jim Dine, Tom Wesselmann, James Rosenquist, Roy Lichtenstein and Andy Warhol and many more -- and their works began to infiltrate further into American pop culture in music, fashion and the bohemian lifestyle that accompanied it. (On the West Coast in 1962, Warhol had his first show of the famed 32 Campbell Soup Cans at the Ferus Gallery in Los Angeles -- provoking local artists and other galleries in the process.) The now-legendary Edie Sedgwick (originally from Santa Barbara, California) moved to New York in 1964 with her friend and would-be promoter Chuck Wein who introduced Sedgwick to Warhol and the rest...well, you know, kids! Meanwhile on the West Coast in 1964, High Priestess of everything hip, cool, bizarre and baroque in the world of interior and furniture design -- Phyllis Morris -- was already creating scenes of her own with over-scaled, over the top furniture and decor that rivaled her legendary parties both at her Beverly Boulevard showroom and her hilltop house in Beverly Hills. That year, Morris commissioned a local artist to create a painting of an enigmatic face that would grace walls throughout the '60s and '70s in the form of large-scaled posters. When Pop Art morphed into other art movements, the "face" artwork faded into obscurity -- that is, until Morris' daughter Jamie Adler rediscovered the image in 2004 and reintroduced this face to the world as "Superstar" wallcovering -- where it has remained the company's #1 selling wallcovering since (shown here in black & white, white & pearlescent, and gold & black). Almost everyone who visits the Phyllis Morris West Hollywood showroom asks the same question -- "is that Edie Sedgwick?" -- and the answer is always the same -- "no one knows for sure."  But it certainly leaves the door open for speculation -- seeing as how all the right aspects seemed to have converged in 1964 when Edie, Phyllis, Warhol and Pop Art mixed and mingled into an art-filled brew that intoxicated everyone at the time.  And what times those where too!  So the mystery remains...and everyone loves a good mystery, eh?
http://phyllismorris.com/trw_browse.php?type=Wallcovering
Room photography by Lee Clower
Posted by studio of style at 10:40 AM