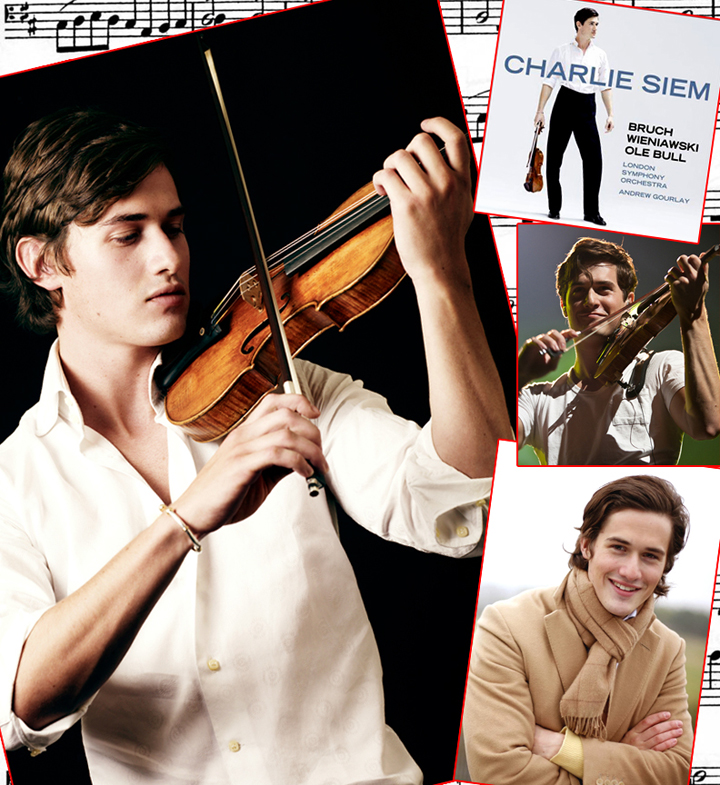 HOT STRINGS & HEART STRINGS: CHARLIE SIEM -- There's no getting around this one, kids.  He's just plain fabulous, that Charlie Siem!  We can't be any more clever than that -- after all, when you start playing the violin at age three (yes!), and after having been loaned a 1735 Guarneri del Gesu d'Egville violin to play on by none other than the late, great Yehudi Menuhin himself (double yes!), and after being tutored by the legendary Shlomo Mintz (triple yes!) and now being a model (four yes's!!) for Alfred Dunhill men's clothing (woo hoo!) -- and being a hunk and a half (what more can we say, kids?) -- it's easy to fall in love with the 25-year-old musical virtuoso.  This UK lad just appeared this past October 2011 at the Royal Albert Hall (how many of us can say that??) and has released a new album where he is accompanied by the London Symphony Orchestra!  Okay, so where do we go from here (other than keep swooning??).  This past June, he appeared with Lady Gaga at her Fashion Icon Award party in New York (how about that one, huh?) Well, his official website hasn't posted any 2012 gigs yet -- but you'd better keep looking every now and then, 'cos you never know when he might be in your vicinity.  Check out some of his YouTube videos and then you'll understand how the entire package comes together (don't ya just love a guy who plays in a white t-shirt??? You know what we mean too if you're a regular reader of Studio of Style!).  So, all we can say to Charlie is...rock on!!
http://www.charliesiem.com/
Caprice in A Minor:  http://www.youtube.com/watch?v=sidWLQY8IxM
Vivaldi's Four Seasons:  http://www.youtube.com/watch?v=NjBtd7Im95c&feature=relmfu
A visit to Cuba:  http://www.youtube.com/watch?v=4EUXIBM1KWY
An overview of this virtuoso  http://www.youtube.com/watch?v=Y0koofkUZ5w&feature=related
Posted by studio of style at 9:12 AM