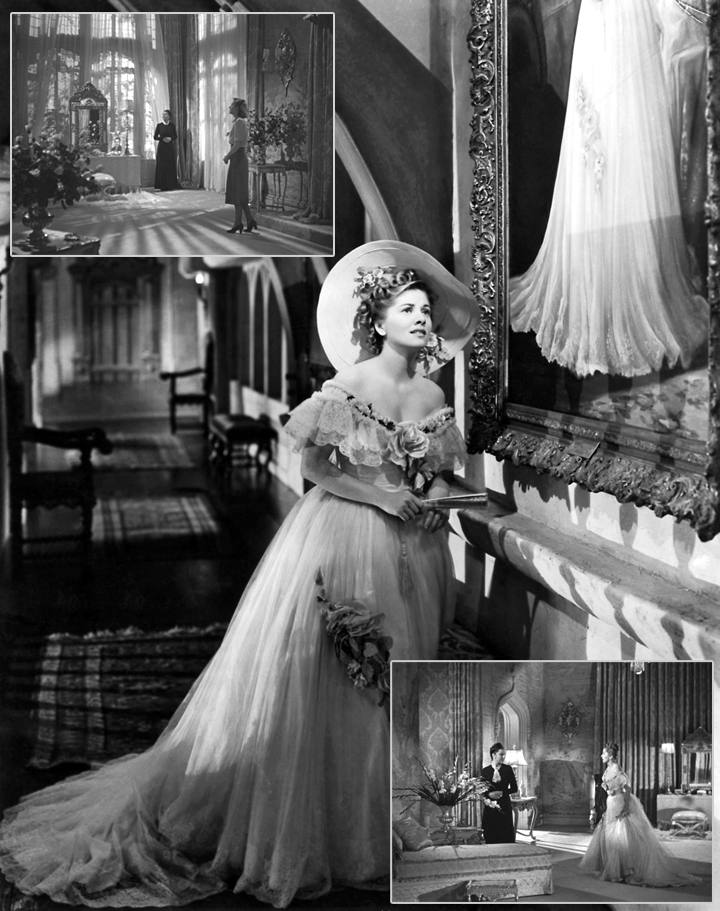 HAUNTINGLY BEAUTIFUL:  You know the real reason we love to watch 1940's Rebecca over and over, don't you?  Yes, Alfred Hitchcock's direction is as masterful as any film made.  And Joan Fontaine's vulnerable character as the new Mrs. de Winter tugs at your heartstrings.  And we all love those wicked, wicked moments of Mrs. Danvers in Judith Anderson's powerful portrayal of evil and possession.  But you know, kids, that it's those incredible rooms created by the team of interior decorator Howard Bristol and interior designer Joseph B. Platt (all gorgeously photographed by George Barnes) that draw our eye into every scene -- making us want to live there forever and ever (and never burn down!).  STYLE NOTES:  As you study the interiors, you'll note that scale is key to making Manderley the most sumptuous house quite possibly ever filmed.  It seems like a gazillion yards of fabric and wallpaper were used to create Rebecca's dreamlike bedroom.  Bouquets of  flowers are everywhere and the quality of light streaming through the ever-so-tall windows is the other main visual effect that gives an otherworldly feel to the film.  Think about all these visual elements combined and you'll know what to do when creating your own Manderley.  By the way, though uncredited in the film, it has been concluded that the renowned costumer Irene created the fabulous "Rebecca gown" shown here.  FINAL NOTE:  The overwhelming romantic feel of the rooms in this classic film can be captured if you really sort through the design elements as I mentioned and build upon them in your own way.  Mrs. Danvers didn't have a ghost of a chance, but you certainly do!
http://en.wikipedia.org/wiki/Rebecca_(1940_film)