Rock On at La Luz de Jesus! Johnette Napolitano is "Still in Hollywood" 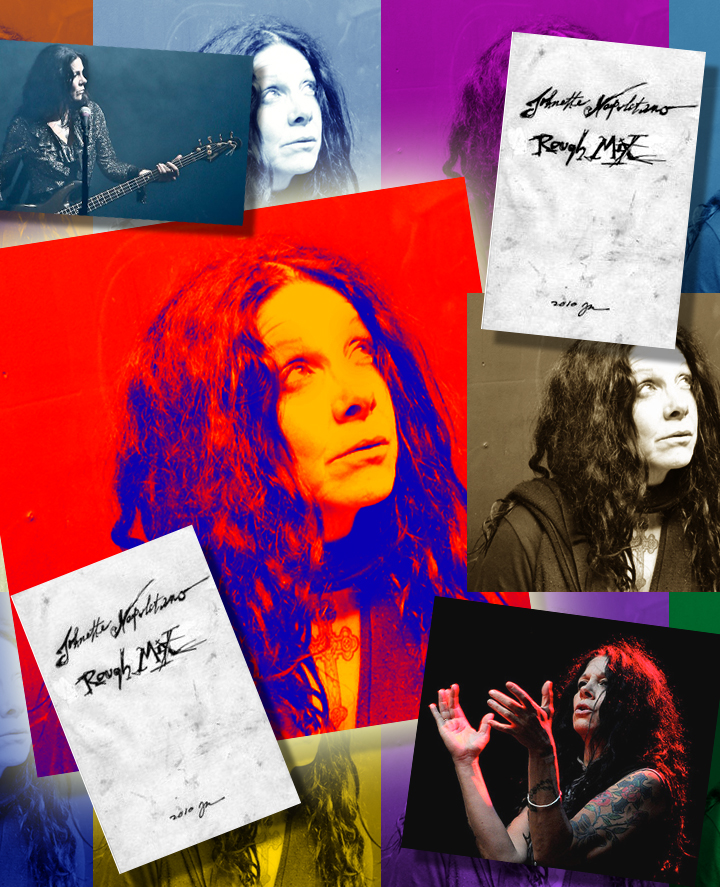 ROCK ON! JOHNETTE NAPOLITANO IS "STILL IN HOLLYWOOD" -- We know it's only rock 'n roll...but we like it! And we certainly like La Luz de Jesus Gallery in the heart of Hollywood (which we've reported on before) and their unique and varied programming that gives more depth and flavor to the L.A. art scene...thank goodness!  For all you rock 'n rollers out there (and we know there's lots!!), you have the opportunity this Sunday, April 22nd from 4 to 7 PM to see and hear an event called "Still in Hollywood" which features a live appearance by Johnette Napolitano -- the beloved bassist, songwriter and lead singer for the L.A. post-punk band Concrete Blonde -- who will be reading extracts from her book "Rough Mix" which is filled with memoirs, stories, poetry, lyrics and essays (now that should be quite a reading!!).  On top of that, kids, you'll get to see (for the first time!) hand-drawn artwork from the book that will also be available for sale (that book is hard to get on Amazon -- so here's the time to buy it from the author!).  Says Johnette, "I was born in Hollywood and this show is what it's about to me, from silent films to a city gone to seed, rediscovered and occupied by the punks and runaways and dreamers back when the band started.  There's always been a dark side."  And if all of that wasn't enough -- drumroll, please -- there will also be the artwork of Jason Bogart on display that afternoon (yes, he's the fourth cousin of icon Humphrey Bogart) and his art is a series of portraits of other Hollywood icons (Judy Garland, Charlie Chaplin, Bela Lugosi) all done in the makeup of rocker Alice Cooper.  Many people aren't aware that Napolitano has long been an established conceptual artist -- with a series of paintings, sculptures, drawings and multi-media pieces to her credit -- which makes this event at La Luz de Jesus a rare moment for those seriously entrenched in the history of L.A. rock music. Concrete Blonde is best known for its 1990 Top 20 hit song "Joey" which went on to be covered by the country music duo Sugarland, which brought a whole new audience to Concrete Blonde (who has 14 albums out there in various forms -- with "Still in Hollywood" being the band's 1994 compilation of live recordings and unreleased material).  So now it's up to you to get over there this Sunday and get in on the artistic fun!
http://www.laluzdejesus.com/
http://www.concreteblondeofficialwebsite.com/
Portrait of Napolitano (morphed many times over by Studio of Style) is courtesy of La Luz de Jesus Gallery
Posted by studio of style at 8:35 AM