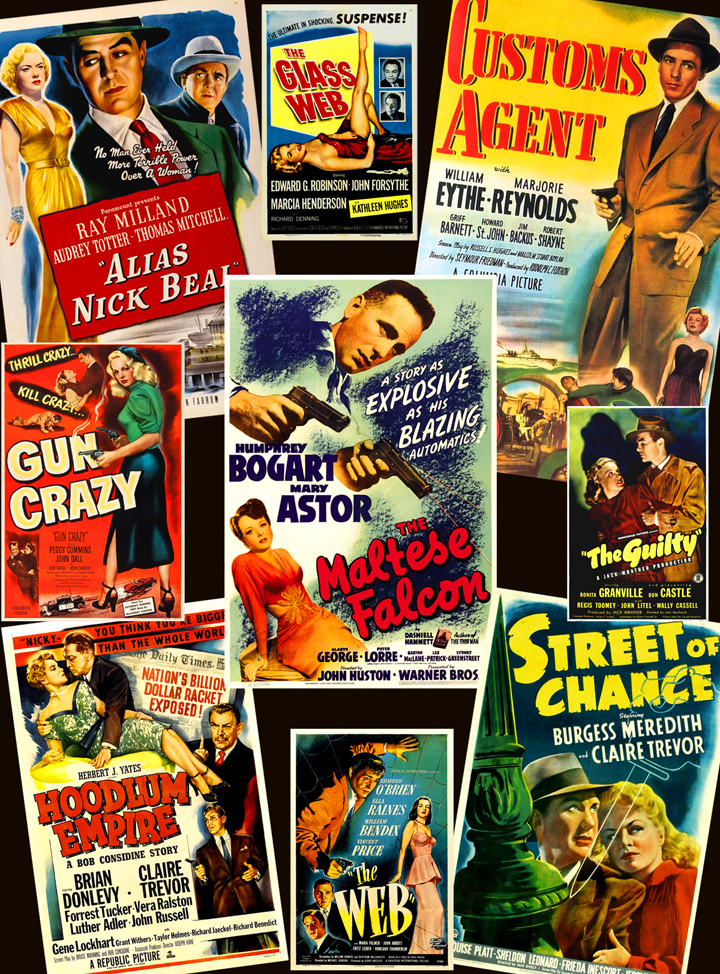 GUYS! GUNS! DAMES! FILM NOIR POSTERS -- There's always a beautiful dame in middle of everything and there's always a wise guy in a wide-brimmed hat with a gun (or two) who's trying to solve mysteries while staying one step ahead of the law and at the same time trying to hold on to some beguiling babe who seems to know everything, but she's not telling nothing -- at least not until he gives her one heckuva kiss while both their lives are in mortal danger.  And, kids, if you understood anything we just said, then you'll love just about any film noir from the golden age of Hollywood film-making when good eventually triumphed over those nasty evil-doers and the guy (wearing his snappy hat, of course) always got his girl in the end (unless you're watching The Maltese Falcon -- but we digress...).  Not only are we at Studio of Style in love with this classic flick genre, but we love the posters just as much!  Masterful compositions in every way, these colorful works of art drew droves of movie-goers with their intensely dramatic imagery which piqued everyone's interest -- alluding to an ever-present sense of danger, plots thick with intrigue and those mostly blonde babes waiting to be rescued by a handsome Joe packing heat in his pocket (in more ways than one!).  And then there's this guy named Mark -- who's a college professor -- but more importantly a great guy with a fascinating and internationally renowned blog Where Danger Lives that is a treasure trove of info and visuals on film noir like you've never seen! Thanks to him, we get to see and read about films that might have gone unnoticed and unappreciated otherwise -- so put on a trench coat, take a peek around the corner (to be sure you're not being followed), and check out his fantastic blog where you'll find chills, thrills and looks that kill!
http://wheredangerlives.blogspot.com
Poster Collage by Greg Firlotte.  Images courtesy Where Danger Lives.
Posted by studio of style at 6:56 PM