The Fantasmagorical World of Kahn & Selesnick at Kopeikin Gallery 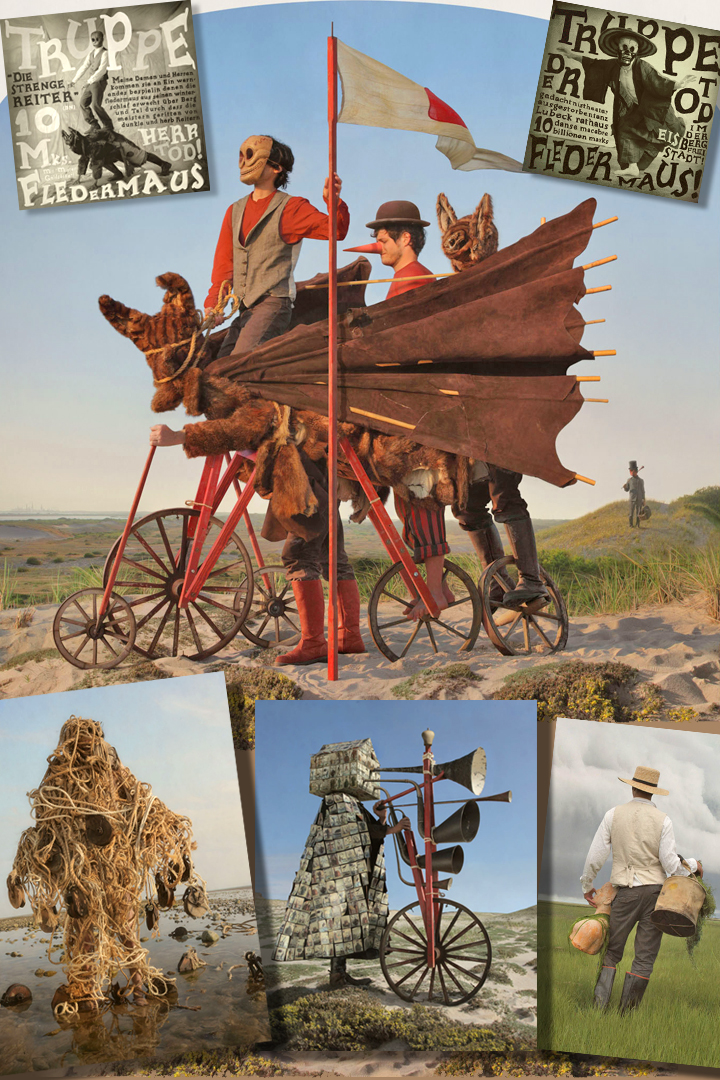 THE FANTASMAGORICAL WORLD OF KAHN & SELESNICK AT KOPEIKIN GALLERY -- It's like a strange, bizarre, beautiful and disturbingly lovely dream -- and it's appearing at the Kopeikin Gallery in Los Angeles from January 12 to February 16, 2013 for those who want to make the journey to see this dreamy netherworld created by New York-state-based artists/photographers Nicholas Kahn and Richard Selesnick.  With a theme of "The Carnival at the End of the World," the exhibition depicts a fictitious cabaret troupe -- the Truppe Fledermaus -- who travel the countryside staging absurd and inscrutable performances in the abandoned landscapes beyond the town's edge. To create this "Theater of Memory," the Truppe are as apt to commemorate the passing of an unusual cloud as they are to be found documenting their own attempts to flee the rising waters of a warming planet, or using black humor to comment upon mass extinction. In addition to using this concept to address ecological themes, Kahn & Selesnick also use it as a metaphor for the manner in which seemingly inexhaustible quantities of information are disseminated to us in the modern world. Wow! We love the very idea of this and can't wait to be at the opening night reception on the 12th (you will join us, won't you?).  As you can see by the images shown above (some of which are details of the fuller works), there is so much to ponder, grasp and be amazed by. But since 1998, the duo photographers have been giving their followers lots to ponder and be amazed by with their joint collaborations of narrative photo-novellas and sculptural installations. Both born in 1964 and having met at Washington University in St. Louis where they informally collaborated in the 1980s while photography majors, Kahn & Selesnick have made a name for themselves with their documentary-style panoramic and square photographs depicting fictitious histories set in the past or the future -- incorporating elaborately crafted artifacts, costumes and sculpture. With more than 100 solo and group exhibitions under their collective belts, Kahn & Selesnick are guaranteed crowd-pleasers with their distinctive brand of photography.
http://www.kopeikingallery.com/
Images courtesy Kopeikin Gallery
Posted by studio of style at 12:33 PM