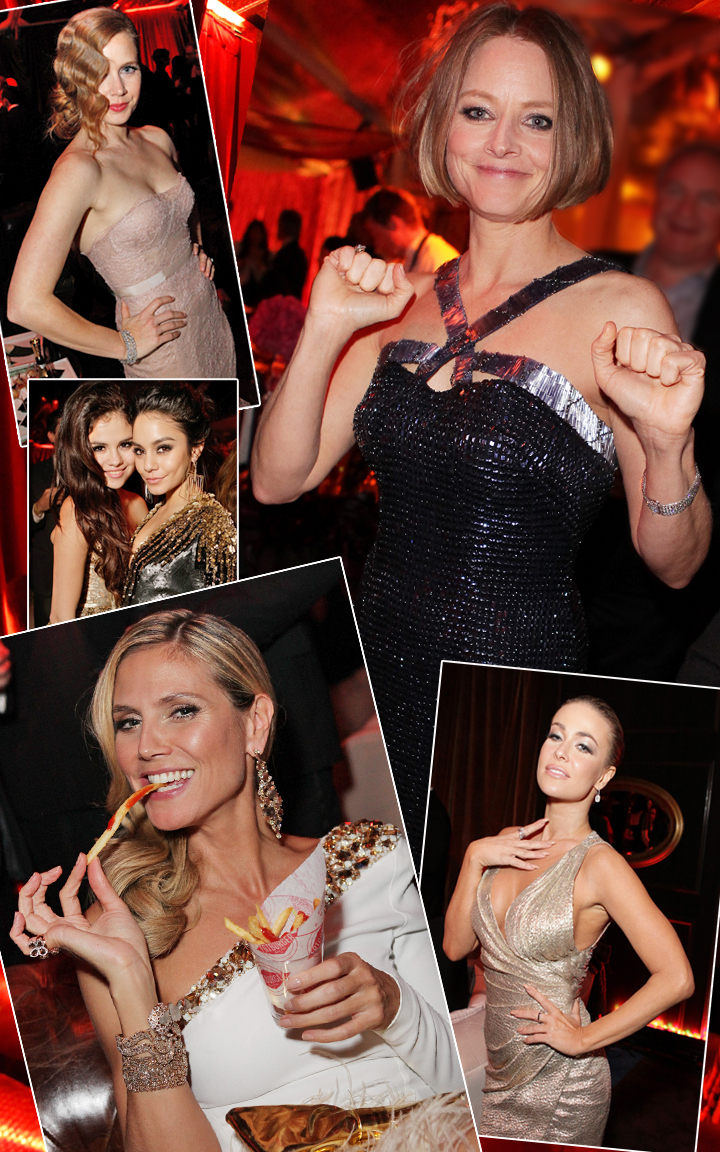 JODIE FOSTER, MARIE CLAIRE, THE WEINSTEIN COMPANY, THE GOLDEN GLOBES!!!  Here in Hollywood, we LOVE a red carpet anytime! But when it comes to the where the action and excitement really happen in Hollywood, you gotta be at the after parties! And THE place to be after the 78th Annual Golden Globe Awards this past Sunday evening was at The Weinstein Company (TWC) After Party at the famed Trader Vic's restaurant at the Beverly Hilton Hotel in Beverly Hills. Sponsored by our favorite fashion magazine Marie Claire -- as well as Chopard, HP, Laura Mercier, Lexus and Yucaipa Films -- this party was dripping with some of Hollywood's hottest ladies!! And THE lady of the evening Jodie Foster (top right) was absolutely radiant in every way -- especially in her stunning Giorgio Armani gown and fresh from her Hollywood moment as the recipient of the Cecil B. DeMille Lifetime Achievement Award! Jodie rocks!!! And we love catching a glimpse of our favorite TV hostess Heidi Klum (bottom left) from Project Runway snacking on fries slathered in ketchup -- yum!!! And it seems that the ladies have gone nude this year -- of course, we're talking about nude-colored gowns like the pale blush Marchesa number worn by the sexy Amy Adams (top left) with her Veronica Lake-inspired hairdo!! And how about Carmen Electra (bottom right) posing sensually for the cameras in her knockout Tom Ford dress and her well-slicked hair that was pure glamour?  And then Selena Gomez and Vanessa Hudson (middle left) sparkled and dazzled everyone in their golden ensembles by Atelier Versace and Jenny Packham respectively. Dare we say that The Weinstein Company After Party was just as exciting as the awards ceremonies? With Marie Claire Editor in Chief Anne Fulenwider and TWC Co-Chairman Harvey Weinstein holding court among the truly star-studded crowd, we can easily say that, for sure! Hollywood is hot....and fabulously stylish! Hooray!!!!
Marie Claire: http://www.marieclaire.com/
The Weinstein Company: http://weinsteinco.com/
Photos by Ari Perilstein/Mike Windle/Jeff Vespa for Getty Images for The Weinstein Company