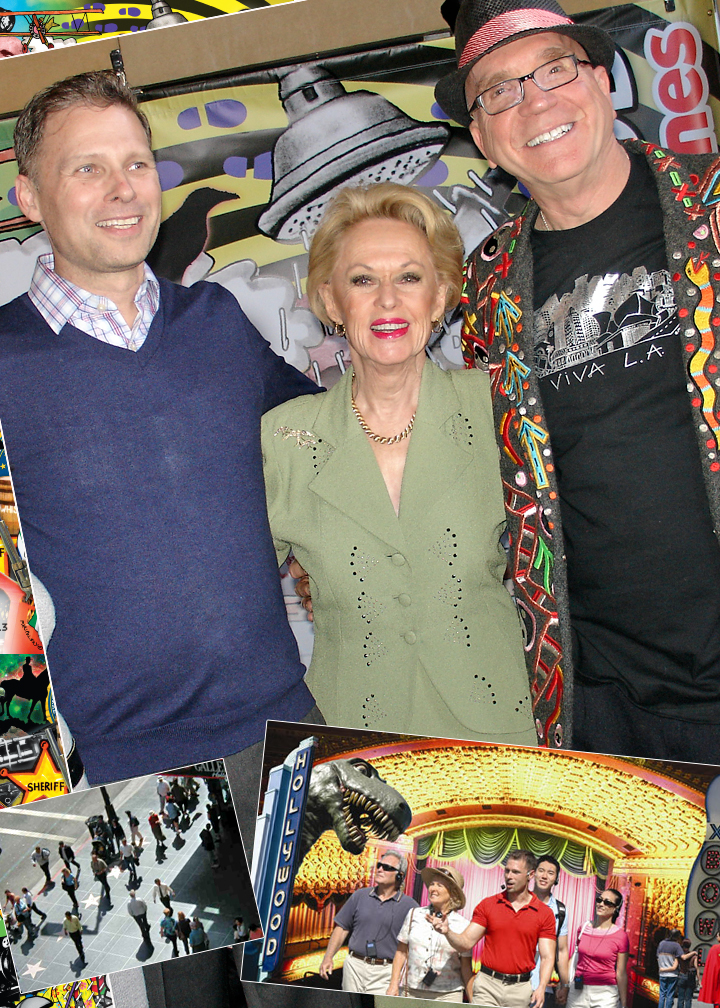 HOORAY FOR HOLLYWOOD....AND TIPPI HEDREN, ANDRE MIRIPOLSKY & RED LINE TOURS!  It was one of those beautiful sun-drenched afternoons in Hollywood, California and the setting was the famed Grauman's Egyptian Theater on Hollywood Boulevard -- and the event was the star-filled reception for the 2nd Annual Commemorative Ticket issued by Red Line Tours and designed by renowned Los Angeles artist Andre Miripolsky (above right). (See artist's story below)  The toast of the event held yesterday, January 17, was legendary actress Tippi Hedren (above center) who was as radiant and gracious as ever! Later that evening, Hedren was feted at the world-renowned Grauman's Chinese Theater (just down the street) for the 50th anniversary tribute screening of that amazing Alfred Hitchcock film The Birds. Red Line Tours invited not only Hedren, but a host of film and television stars to salute the release of its four-part "Hollywood Behind-the-Scenes" ticket which is a premium keepsake for those taking the popular walking tour through the streets of Hollywood.  Red Line founder Tony Hoover (above left) created this top Hollywood attraction many years ago and it has since become a must-see tour for those who love everything about Hollywood (yes!). "Hollywood Behind-the-Scenes" presents a journey of Hollywood's most famous landmarks, how the town got its name, information about the Hollywood Sign and takes you to places during the 75-minute, three-block walking tour that you would never know about if you tried to do it on your own -- and it includes an amazing live audio system that allows you to hear what your guide is saying no matter how loud the street traffic is. During the commemorative event yesterday, all eyes were equally on the beautiful Ms. Hedren and those fabulous colorful tickets (given out to those in attendance) that were designed by Miripolsky. What's not to love about Hollywood, we ask?
Andre Miripolsky: http://miripolskystudio.com/
Tippi Hedren Shambala Preserve: http://www.shambala.org/
Red Line Tours: http://www.redlinetours.com
Group photo by Greg Firlotte / Tour images courtesy Red Line Tours
Posted by studio of style at 5:03 PM