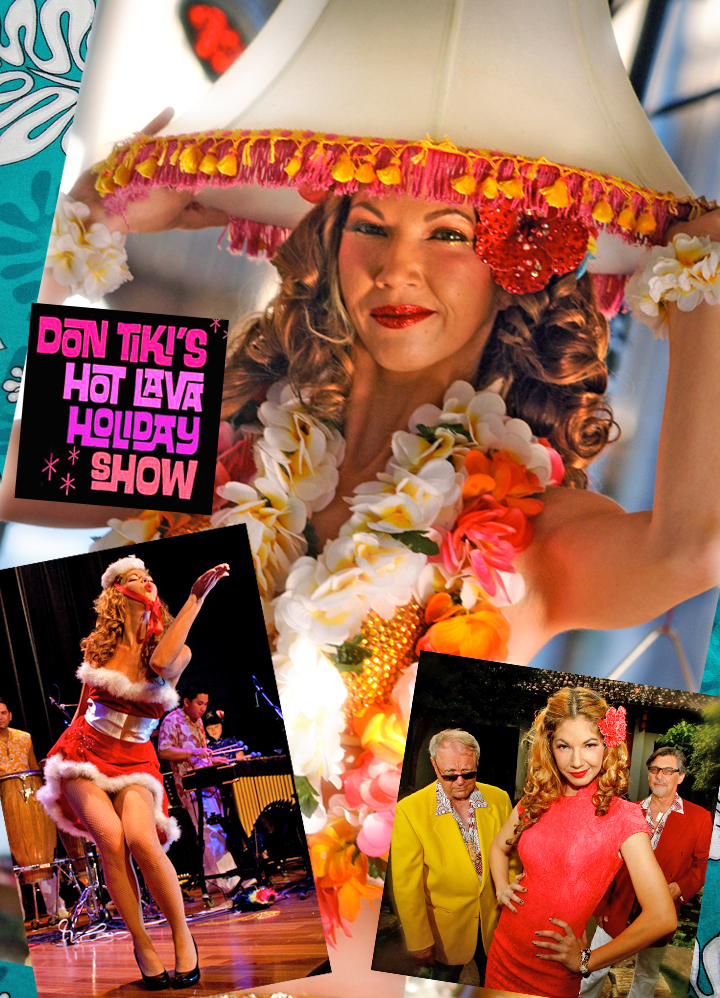 MORE TIKI MADNESS IN TINSELTOWN! DON TIKI'S HOLIDAY SHOW AT DISNEY HALL -- Okay kids, let's mix up some rum drinks 'cos we're gonna celebrate the Yuletide with a Hawaiian twist on December 20 in Los Angeles! We at Studio of Style can never get enough tiki -- and there's no better way to get lei'd (did we say that??) than with the exotic sounds of Don Tiki -- Honolulu's legendary collective of musicians, vocalists and dancers.  There's so much to see and hear in this show coming direct from the Isle of Paradise that you'll swear that the Walt Disney Concert Hall in downtown L.A. is just one big luau!! Everything will be shaken and definitely not stirred when this ensemble lets loose with their jungle jazzy sounds that pay homage to those Mid-Century masters of exotica music: Martin Denny, Arthur Lyman and Les Baxter!! Don Tiki has moved this beloved brand of music into the 21st century -- and even the master himself, Martin Denny, played on the band's 1997 debut album The Forbidden Sounds of Don Tiki and you can't get better than that! Of course, you'll be seeing dancer Violetta Beretta (that gorgeous living tiki lamp and Santa doll, shown above!) at Disney Hall, plus lots more dancers, guest vocalists, drummers, a comedienne, a bird-call man, and so many, many more performers and surprises -- what more can we say? In fact, Don Tiki co-founder Lloyd "Fluid Floyd" Kandell let us in on the Los Angeles program in an exclusive interview with Studio of Style: "We were requested to include some holiday-style tiki songs," says Kandell, "so our band leader and composer (and co-founder) Kit "Perry Coma" Ebersbach came up with "Jungle Jollyday" -- whose title came from our singer Sherry Shaoling. And another song "Xmas Eve at the Club Bambu" is a seductive updating of the duet standard "Baby It's Cold Outside." Not to mention some tiki-style instrumentals of traditional holiday songs -- plus lyrics from some of our existing songs to fit the holiday theme.  All of these will debut at Disney Hall."

Studio of Style: So how did this imaginative musical ensemble begin in the first place?

Fluid Floyd: First of all, I have fond memories of hearing exotica and tiki music at my parent's backyard luau parties while I was growing up in Southern California.  But the formation of the band was sparked by a sudden friendship with the legendary Martin Denny who invented and popularized this style of music during Hawaii's statehood days. The kindling of the flame was when we realized how interesting the conventions of Mr. Denny's sound stylings were and that those musical possibilities were endless.

Studio of Style: What was your first show like as the band Don Tiki?

Fluid Floyd:  Our first live gig was at the fabled Kahiki supper club in Columbus, Ohio -- thanks to Otto von Stroheim, publisher of Tiki News. Sadly, it was the last night of this insane tiki place and the tiki luminaries from around the world were in attendance -- and we filmed a lovely message from Martin Denny that concluded with him playing "Quiet Village" on his grand piano as our band starting playing along live with him. Those true tiki believers lost their minds and we were off and running with our set of original exotica music!

Fluid Floyd: I met him when he was 80 years old at a Steinway piano recital here in Honolulu and he was very gracious, warm and a great raconteur. He was thrilled that we were interested in reviving this almost-lost genre of music and he agreed to sit in on our first record release "The Forbidden Sounds of Don Tiki." Marty was always very positive and encouraging -- and attended every one of our live performances in Hawaii.

Studio of Style: What was it like to perform in Berlin, Germany?

Fluid Floyd: Berlin was amazing! I guess the further you are from the source, the more exotic it becomes. Fans came in vintage tiki attire and danced and sang along to every song. We felt like rock stars!

Studio of Style: What is it about exotica music and the tiki lifestyle that has endured over the decades and continues to attract people to it?

Fluid Floyd: Sven Kirsten, author of "The Book of Tiki" and "Modern Tiki," said it best in his liner notes for our album "Skinny Dip with Don Tiki" -- In this day and age, we are all aware that paradise on Earth does not exist. Yet the need for it is eternal and can be playfully indulged in. Tiki bars are being erected again in city centers, living room corners and office cubicles, where the sultry rhythms of Exotica resound. Don Tiki is providing the soundtrack for this Technicolor projection of a Polynesian pop paradise."