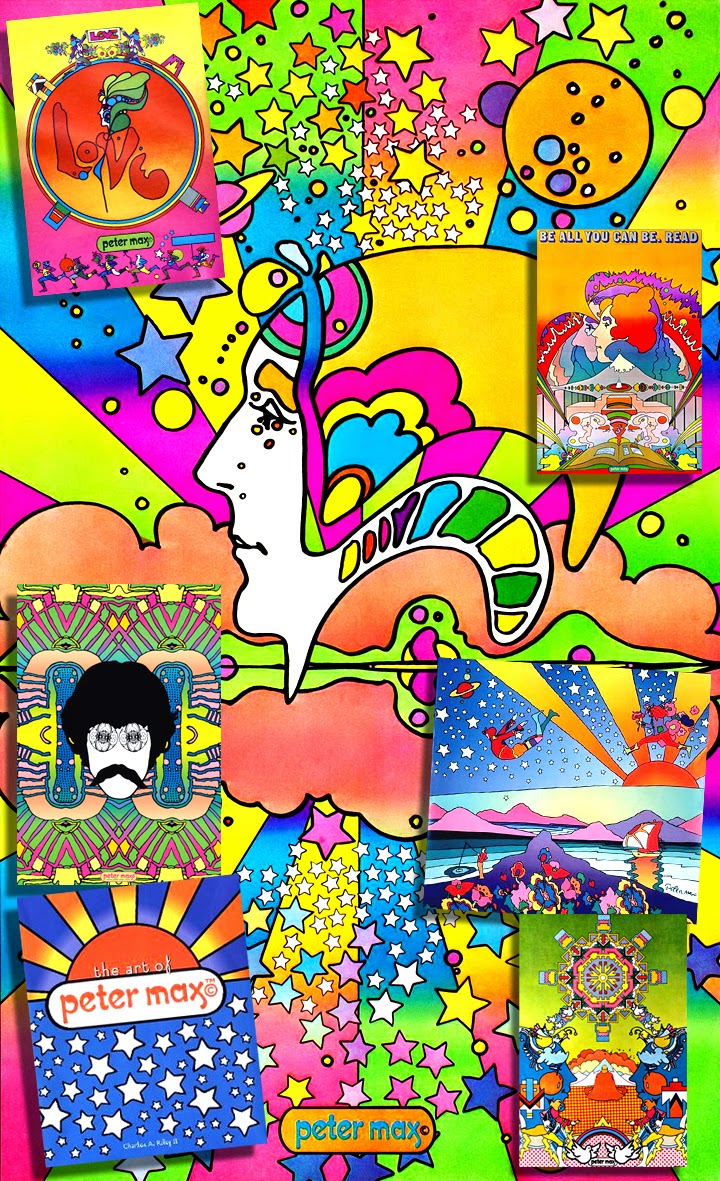 PEACE, LOVE, POSTERS AND PETER MAX!  To today's generation, Pop artist Peter Max is probably best known for his vibrant depictions of the Statue of Liberty, the American flag, hearts, sports figures, flowers and angels -- but to another generation, he was the artist that brought psychedelic colors and imagery to the mainstream in the late 1960s, filling college dorms and hippie shops (or head shops, as they were called) with fabulous posters that galvanized the youth movement around the themes of love, peace and the environment in a way that had never been done before!  The poster medium was at its height during those days, being a common visual denominator for every social issue, allowing for the easy dispersal of whatever message needed saying.  Poster shops were everywhere -- offering vinyl records, beads, incense, fashion paraphernalia and such -- and Peter Max was the king of poster artists (the main purpose of posters, for many, was for something to stare at while you indulged in some recreational substances -- not that we everdid any! -- or to meditate upon as you burned sandalwood incense and listened to Ravi Shankar's hypnotic music!). Max's amazing color sense, his love of Asian art, Buddhist philosophy and astronomy (i.e. anything cosmic!) all came together at the right time -- and as the sixties gave way to the seventies, Max was in the perfect position to become the darling of the media. His work was suddenly everywhere! From 7-Up television commercials to his appearance on the cover of Life magazine (yes!) to the 1970 exhibition "The World of Peter Max" at the M.H. de Young Memorial Museum in San Francisco (an appropriate city for his work -- the birthplace of the psychedelic culture!). By 1974, Max became even more popular with the issue of a ten-cent postage stamp that commemorated Expo '74 -- the first World's Fair with an environmental theme.  As with all artists, Max's style changed and morphed to encompass many other subjects and the all-mighty poster was eventually replaced with other forms of media, plus product merchandising with licensing from at least 72 corporations at one time -- making Max one of the most successful American Pop artists of all time.  He still makes appearances (check his website for those) and his love for the environment as well as human and animal rights has never wavered over the decades.  And so now we savor those '60s moments all the more in their psychedelic glory. And, of course, we at Studio of Style have never given up on peace and love as the best solutions for the world's ills and ailments. And we've always believed in color therapy -- starting with the colorful work of Peter Max to always make us feel fabulous!
Arist website: http://www.petermax.com/ Images copyright and courtesy of Peter MaxGroovy collage of Peter Max artwork by Greg Firlotte
Posted by studio of style at 7:53 AM