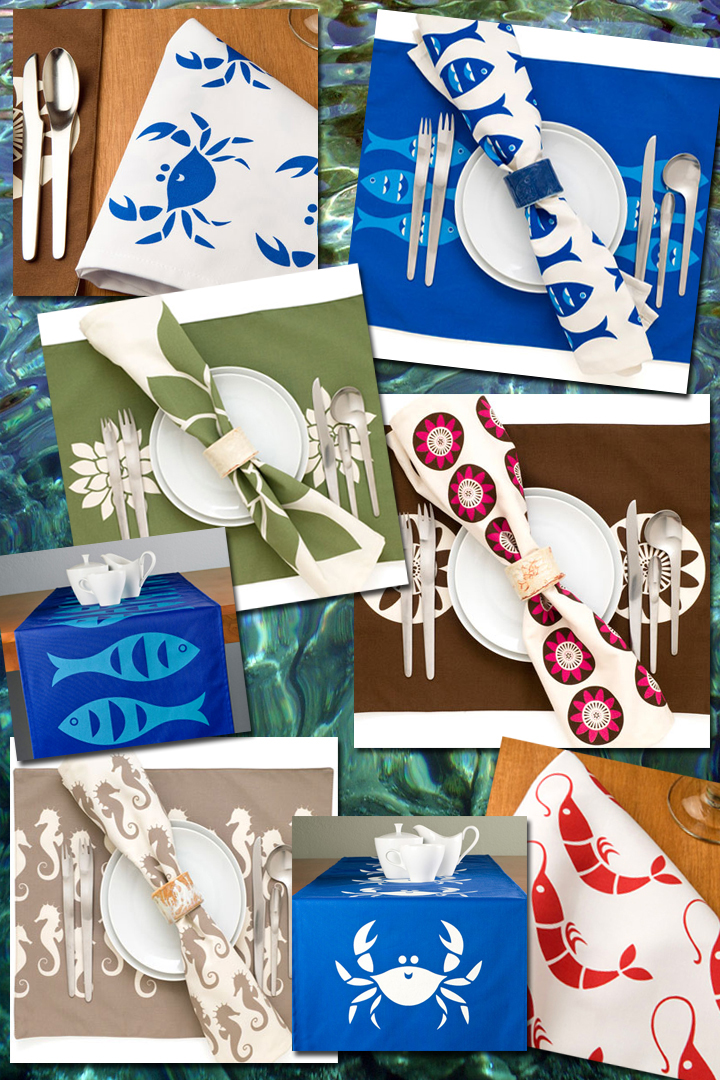 DINNER IS SERVED...IN COASTAL ECO-FRIENDLY STYLE FROM WABISABI GREEN! -- We'd like to say that "she sells shells by the seashore," but that wouldn't be quite true -- however Jolee Pink does sell some fabulous eco-friendly home decor items from the seaside town of Encinitas, California through her company Wabisabi Green that she founded because of her love for the Pacific Ocean, its abundant sea life and the casual California coastal lifestyle that she enjoys to the max. Pink started her career as a graphic designer and eventually turned to working in clay as a way of expressing the natural environment in ceramic objects infused with a fun, organic appeal.  Around 2008 she began producing textiles for throw pillows which were designed especially for her modern ocean-themed living room which was featured in a prominent San Diego magazine.  It was only a natural next step for Pink to create more items for the home and garden -- including place mats, napkins, throw pillows, table runners and ceramic tile art, sculptures and outdoor art furniture. Pink uses GOTS soft organic cotton, soft and fluffy eco fiber that is 100% hypoallergenic and made from recycled plastic bottles rescued from landfills (brava Jolee!) and environmentally-safe water-based inks -- plus she purchases from U.S. based suppliers with a sustainable approach to manufacturing and all her products are handcrafted in Southern California. But what we like best are the bright colors, bold graphics and playful charm that conjures up the sea in a modern, yet timeless way! The napkins, place mats and runners shown here are among our favorites -- making us want to throw a seafood dinner party for no reason at all other than to just enjoy the vibrant designs that Pink has created.  Plus, the company sells reusable "paper" towels made from organic Fair Trade cotton in a fabulous seahorse design.  On top of all this, Pink is debuting her Living Coastal coffee table book this fall that features a blend of food from Southern California chefs with artists who collaborate on maritime-themed entertaining for both indoors and out -- including seafood recipes. Amazing for a lady who was simply in love with the sea and wanted to share this love with others.  Such is the power of a vision and a passion!
http://www.wabisabigreen.comAll images courtesy Wabisabi Green
Posted by studio of style at 2:37 PM

Blue Lagoon: The Watery Hues of Glass from Murano, Italy 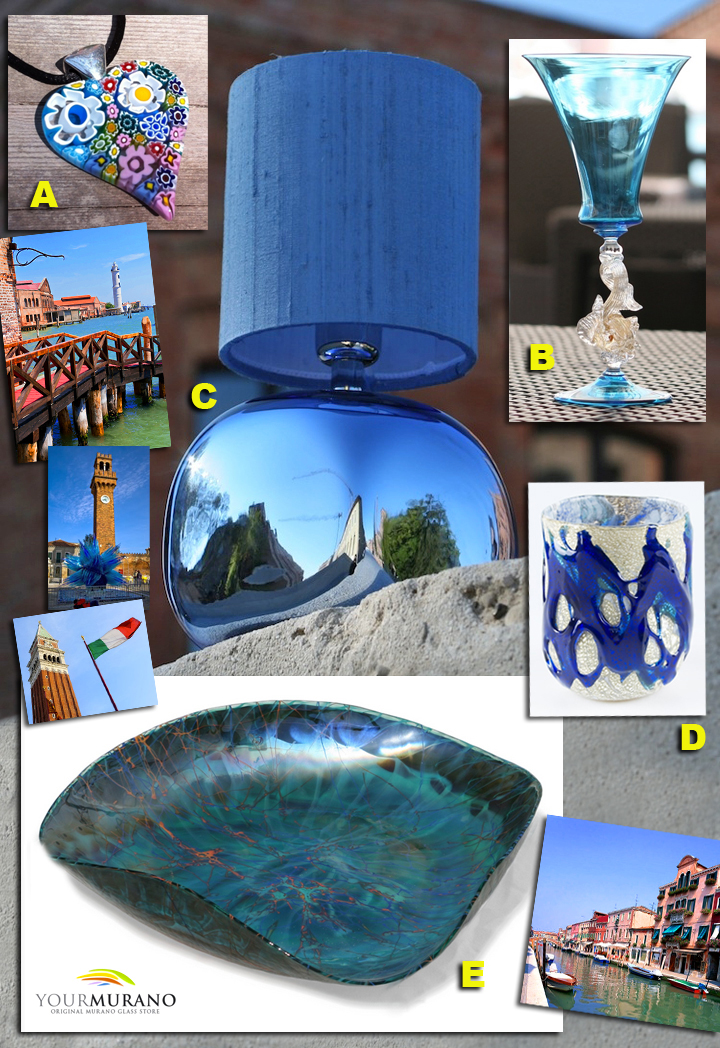 BLUE LAGOON: THE WATERY HUES OF GLASS FROM MURANO, ITALY -- People from around the world descend upon the island of Murano in the blue Venetian Lagoon for basically one thing: to acquire the sumptuously beautiful glass objects which have been crafted here for centuries -- and now, like then, each and every piece of glass is made completely by hand in the glorious tradition which has gone unchanged, much to the delight of everyone who owns these glass treasures from Murano. And thanks to YourMurano company, owners of Murano glass can be assured that their purchases are guaranteed the "Vetro Artistico Murano" mark of origin that is protected by Italian law.  The company's online store offers vases, centerpieces, goblets, sculptures, lighting, mirrors, jewelry, glassware and gifts -- in fact, something for everyone! If you love the ever-changing blue colors of the Adriatic Sea which surrounds Murano and Venice, then the wide array of water-hued glass from YourMurano provides many choices from the palest of aqua to rich cobalt to the multi-layered colors that reflect the ancient sea. Here are just some of the beautiful blue objects we found at YourMurano: A) Heart-shaped Campanellino pendant by Ercole Moretti with millefiori murrine; B) Mantegna aqua goblet with dolphin-shaped stem with gold leaf by Seguso Gianni -- bella!; C) a beautiful blue mirrored glass Ciottolino-T table lamp with tone-on-tone shade by Simone Cenedese; D) a lovely Goto Desio "goto di fornaso" glass by DIPI embellished with silver leaf and white and violet filaments with each one signed by the master glassmaker; and E) the Tarantula Nebula mother of pearl glass plate by Yalos Murano from the Nebulose Collection by Guido Ferro.
http://www.yourmurano.com/en/
Product images courtesy YourMurano
Posted by studio of style at 11:34 AM

Seeing is Believing: Tracie Bennett as Judy Garland in "End of the Rainbow" 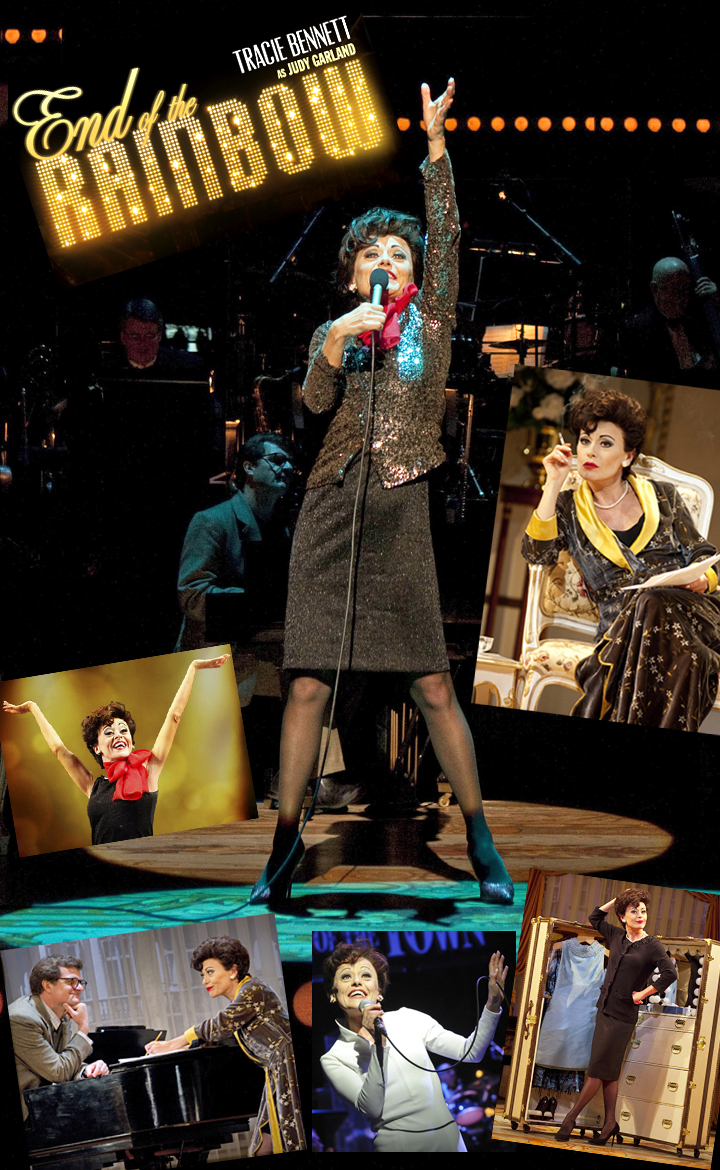 SEEING IS BELIEVING: TRACIE BENNETT AS JUDY GARLAND IN "END OF THE RAINBOW" -- Yes, kids, the old addage is still true: seeing is believing -- and it's never been truer than in the hit London, Broadway and now Los Angeles production of "End of the Rainbow" starring the effervescent and irresistably lovable Tracie Bennett in a role that many would envy, but few could ever pull off with such conviction and aplomb. Currently playing at the Ahmanson Theatre in downtown L.A. through April 21st, 2013 and presented by the Center Theatre Group, this musical play is a must-see! And when we at Studio of Style say that, we mean it!! Peppered with both adult language and sexual situations throughout, this play will jolt you into another realm regarding the tragic end of Garland's roller coaster career and relationships. The play is set in the Ritz Hotel in London in 1968 -- the year before she passed away from drug overdose in a rented house in Chelsea -- and the excellent supporting cast of Erik Heger (as Garland's last fiance/husband Mickey Deans), Michael Cumpsty (as Anthony, Garland's gay pianist and the only one with a level head on him) and Miles Anderson (playing multiple roles) all intertwine in a nonstop whirl of love, compassion, sympathy, sadness and the sense of the inevitable that hangs in the air throughout. Bennett's musical delivery and stance is without comparison, going between breathtaking and stunning -- in fact, one could close their eyes during the play's many numbers and swear that Garland was alive and well and performing right there and then! The spine-tingling delivery of "The Man That Got Away" (by Harold Arlen and Ira Gershwin) is so haunting and sung so powerfully by Bennett at the end of Act I that it, alone, is worth the entire price of admission! On top of that are so many more Garland chestnuts that you'll be toe-tapping all night as the play takes you from hotel suite to the Talk of the Town nightclub set in the blink of an eye in a wonderfully seamless production directed by the award-winning Terry Johnson -- and we can't forget that it is all the product of acclaimed playwright Peter Quilter. So, now all you need do is to catch this gem of a show before it ends its run in L.A. and prepare yourself for a magical night of theater, song and Garland, Garland, Garland! It will make a believer out of you!
http://endoftherainbowbroadway.com
Posted by studio of style at 10:45 AM

Cities within a City: Discovering Palos Verdes, California with ICAA on April 6th 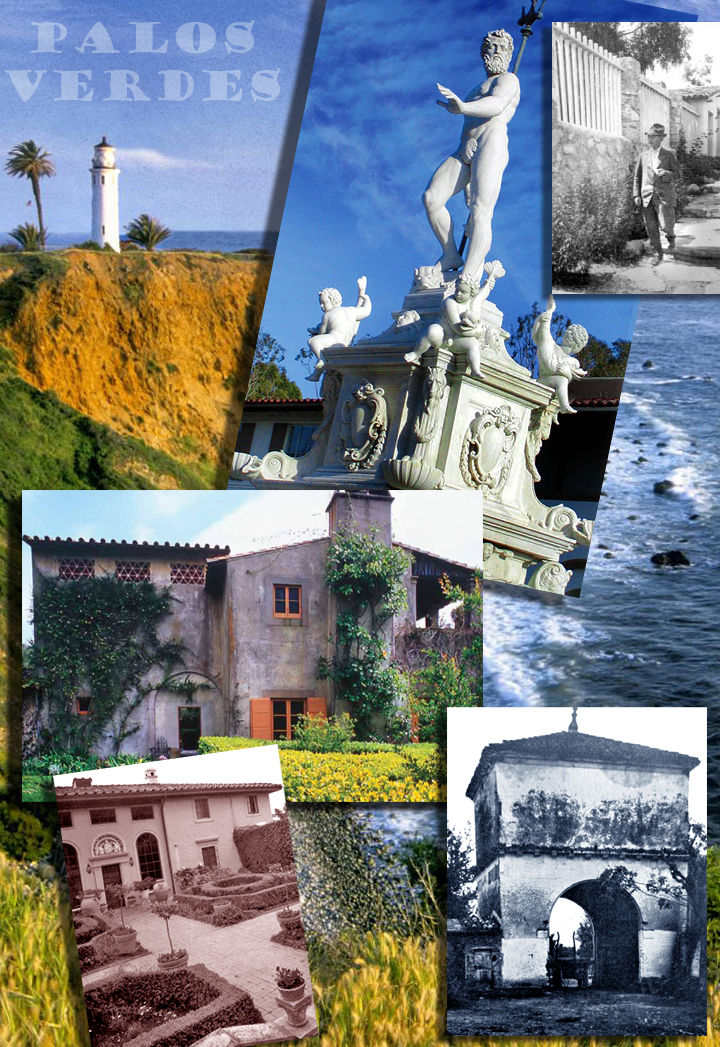 CITIES WITHIN A CITY: DISCOVERING PALOS VERDES, CALIFORNIA WITH ICAA ON APRIL 6th -- It's spectacularly beautiful on a verdant peninsula, quietly rich and mysterious even to residents of Los Angeles situated just miles to the north -- and now you have an opportunity to get a delightful insider's view of that "hill town" Palos Verdes thanks to the Southern California Chapter of Institute of Classical Architecture & Art on Saturday, April 6th 2013. Many people are somewhat surprised to hear that Palos Verdes Estates (as it is properly called) was one of the earliest master-planned communities in the U.S. -- and that it is the 81st richest town in America, not to mention that it is the 47th most expensive housing area in the U.S. as well! Which makes the tour, luncheon and presentation this coming Saturday by the ICAA a very special treat indeed for those who have always wondered just how this once-exclusive enclave (owned entirely by Frank A. Vanderlip and a consortium of his associates) was transformed acre by acre into the tony town that it is today. "Palos Verdes is a superb example of 20th century urban planning in the Beaux Arts tradition," notes ICAA Southern California Chapter board member Andrew Tullis. "The strength of the original plan by the Olmsted brothers -- Frederick Law Olmsted Jr. and John C. Olmsted -- can still be seen today in much of the development of Palos Verdes and this tour will be seeing the best of it." This tour is the first in a series by ICAA titled "Cities within a City" which will focus on important historical towns, landmarks and architecture in and around the Los Angeles area -- an area that is absolutely rich with such, but all that will change as ICAA rolls out these tours over the coming year. "To have access to some of the grand homes in Palos Verdes by such noted architects as Olmsted, Myron Hunt, Frank Vanderlip and Gordon Kaufmann is a rarity," says Michael Grosswendt of All Coast Construction which is sponsoring the tour. "For anyone who has been inspired by this beautiful coastal city and its historic treasures, this tour will surpass expectations." The tour's starting place is, naturally, at one of the town's landmarks -- the public library (designed in 1930 by Myron Hunt) -- and then the tour continues onto the Neptune fountain (erected in 1930 in the town center) which is a replica of the famed La Fontana del Nettuno found in Bologna, Italy. From there, there are self-guided tours of gardens, interiors and studios which round out the day. This kind of opportunity to learn about a town's history is rare and getting inside the homes and gardens found in the beautiful, mysterious Palos Verdes is even rarer. Portuguese explorer Juan Cabrillo first caught glimpse of this breathtaking peninsula in 1542 while sailing the California coast -- and now you can discover Palos Verdes for yourself on April 6th -- sound like a plan?
Tour Info: http://www.classicist-socal.org./
Posted by studio of style at 5:50 PM