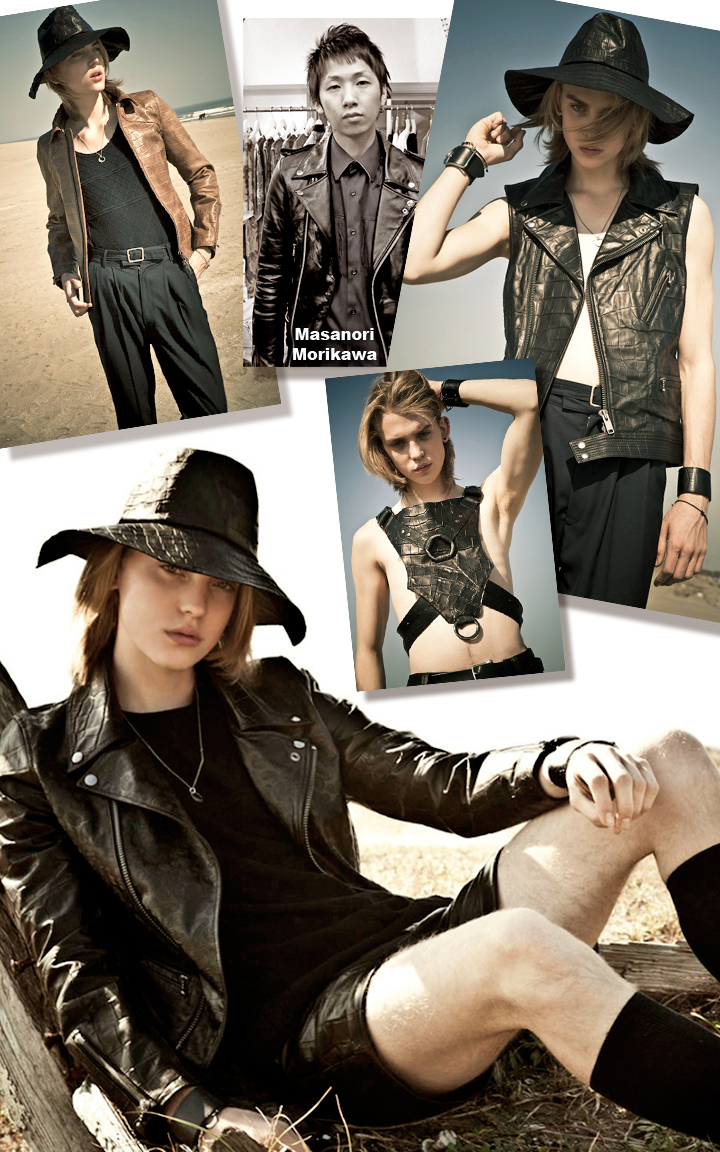 DESTINATION TOKYO: CHRISTIAN DADA DELIVERS MODERN CLASSIC STYLE -- Japan is hot -- especially in the winter!! That's because Mercedes Benz Fashion Week takes place in February (in fact, it's going on right now!) and there is so much fabulous fashion to see that we hardly know where to begin to tell you (but do check out the link below for yourself and get in on the excitement, okay?). Among the 40+ design houses being shown this week in Tokyo is the brand Christian Dada which is the brainchild of Masanori Morikawa (top center photo) who is among the rising stars in the Land of the Rising Sun -- and we wanted to share this with you -- our stylish reader who is always in the know about everything that is worth knowing about! When you go to the Christian Dada site, you'll notice that almost everything in this collection is sold out!!! And we can understand why -- because Morikawa has that unmistakable sense of knowing how to put together ensembles in the most classic of combinations of color palettes and materials to put his own spin on clothing that spans numerous decades of fashion influences that are strong and very wearable! Morikawa (after being a personal assistant at Charles Anastase in Paris) launched his own menswear collection in Japan for the 2010 Autumn/Winter season and has gone on to create two outfits for Lady Gaga, as well as launching a women's collection. We at Studio of Style just love everything he puts his hand to -- such as the embossed leathers, diamond quilting and the biker jacket look -- and we certainly wish him much success at Fashion Week in Tokyo (and we wish we were there right now to cheer him on). And, of course, we wish we were wearing that embossed leather hat of his -- how fabulous is that?
See More: http://www.christiandada.jp/
MBFashionWeek: http://tokyo-mbfashionweek.com/en/
Images courtesy Christian Dada
Posted by studio of style at 5:57 PM 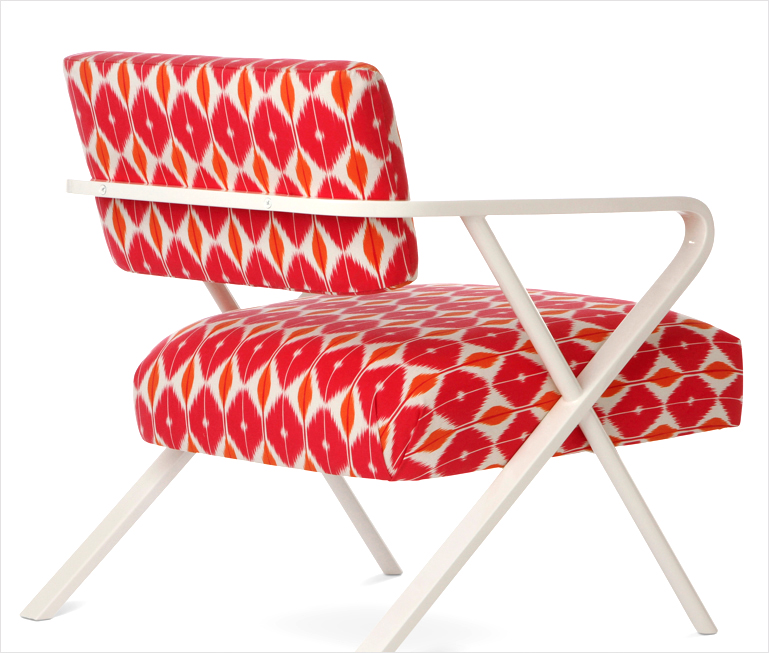 CLASSIC COOL: THE IRON X CHAIR BY WILLIAM HAINES -- We at Studio of Style just love to wax poetic about anything and everything that evokes the cool and sophisticated vibe of living in California -- and the X Chair takes the cake (and you can put a cherry on top of that too!).  Originally designed by Hollywood actor-turned-interior-and-furniture designer William Haines for award-winning movie mogul Mervyn Leroy (who discovered Clark Gable, Loretta Young and Lana Turner!) and his wife Kitty for their Bel Air, California sunroom lanai, this chair is fashioned from iron and shown here in a powder-coated white finish for outdoor use year-round in the glorious California climate. But it works just as fabulously indoors as well. And we love the raspberry Sarong texile from F. Schumacher shown here that gives this chair an exotic flair -- don't you agree? We suggest you visit the William Haines site and get to know all about this dramatically talented man who was so well-loved by the Hollywood crowd and the Nancy Reagan White House set too -- and everyone one in-between, because you never know when you'll be at some swell soiree in Hollywood and find yourself sitting on a Haines original piece and you can become the hit of the party with your insider info about Haines and his place in the California design spectrum. How cool would that be?
William Haines furniture:  http://www.williamhaines.com/
Posted by studio of style at 6:47 PM

Kim Novak in Hitchcock's Vertigo: Still Fabulous After All These Years! 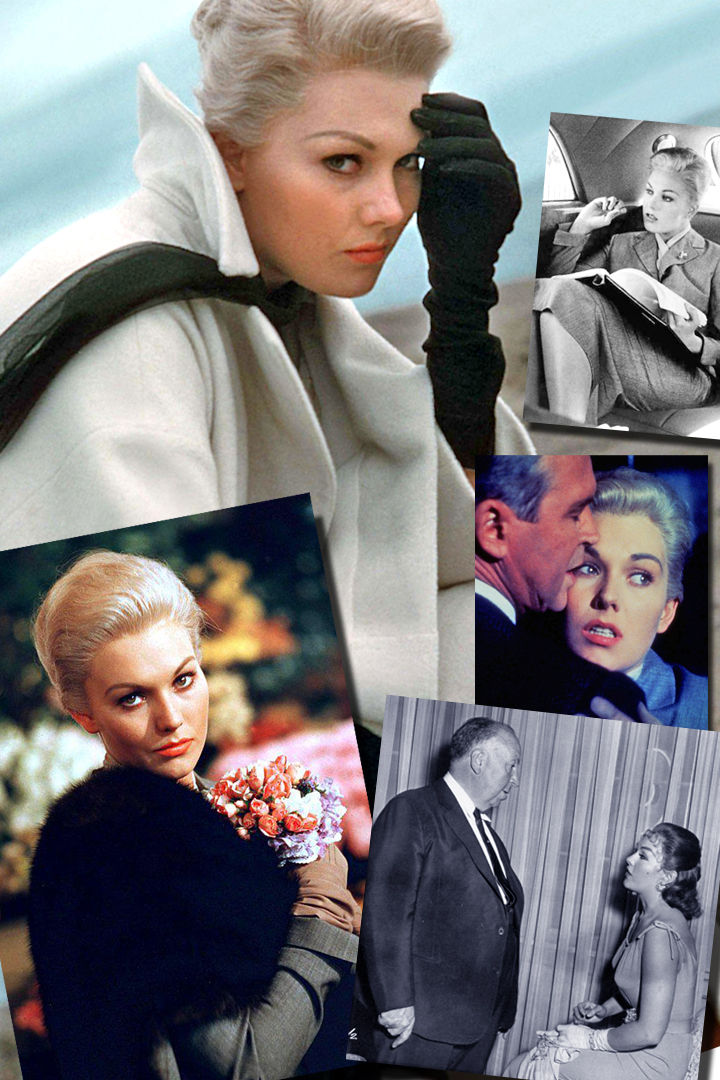 KIM NOVAK IN HITCHCOCK'S VERTIGO: STILL FABULOUS AFTER ALL THESE YEARS!  Wow! Just when we thought we'd seen (and got to know) all the classic Alfred Hitchcock films, Studio of Style was thoroughly excited about the one Hitch film that has so much still going for it: Vertigo.  Filmed in 1957 San Francisco, Vertigo captures The City by the Bay in a moment of time that will never come again: a gleaming white city that is sunlit and blue by day -- and glowing so beautifully in the afternoon sun (such as the scene beneath the Golden Gate Bridge) -- and then twinkling under the cover of darkness and looking so silent and grand during twilight (but then, Hitchcock always had a way with portraying cities, towns and landmarks that forever etches their essences in one's mind!). But the one object that the viewer cannot take their eyes away from is the sensational award-winning actress Kim Novak in her at-turns mysterious/sexy/sad/fragile dual character Madeleine Elster and Judy Barton who drives co-star and romantic interest James Stewart (shown in middle right photo) madly in love with the platinum blonde Novak (and what red-blooded male wouldn't be??). Keep in mind that Novak's character is actually a small-town girl portraying a sophisticated city lady who tries to convince Stewart that she is his best friend's slowly-going-mad wife -- whew! Keeping all this in check by using body language, gestures and carefully-cultivated words would be a feat for any actress -- but Novak pulls it off with amazing grace and composure and believability -- and we, the audience are taken along for a ride that has a lot of twists and turns, for sure. Vertigo was released in 1958 to a wide range of mixed reviews, surprising by today's opinion of the film as a classic -- many a critic thought it too long, too complex, too slow -- but the (now defunct) Los Angeles Examiner and The New York Times both wrote rave reviews and subsequently the film has been reevaluated and recognized for its place in cinema history -- and Novak would eventually receive a star on the Hollywood Walk of Fame (at 6332 Hollywood Boulevard) and then leave her handprints and footprints in cement at Grauman's Chinese Theater, also on Hollywood Boulevard. (Oh, and did we mention the fabulous wardrobe designed by Edith Head -- that famous gray tweed suit worn by Novak!) As for the locations shown in the film, you can actually still see or go to the site of many of them in San Francisco and parts around the Bay Area in Pebble Beach, Route 101 through the eucalpytus grove (one of our favorite drives!!), Mission San Jaun Bautista, Big Basin Redwoods State Park, Muir Woods and other locales. And yes, we know that Hitchcock had a host of fair-haired ladies in his films -- Grace Kelly, Ingrid Bergman, Doris Day, Tippi Hedren, Joan Fontaine, Eva Marie Saint, Marlene Dietrich and Janet Leigh -- but Kim Novak completely steals our heart with her sensuous and timeless performance found in Vertigo.  What a lovely film to visit -- the next time you want to go to San Francisco!
More about Kim Novak:  http://en.wikipedia.org/wiki/Kim_Novak
More about Vertigo:  http://en.wikipedia.org/wiki/Vertigo_(film)
Posted by studio of style at 6:13 PM

A World of Stylish New Table Lamps from Lladró -- Brilliant! 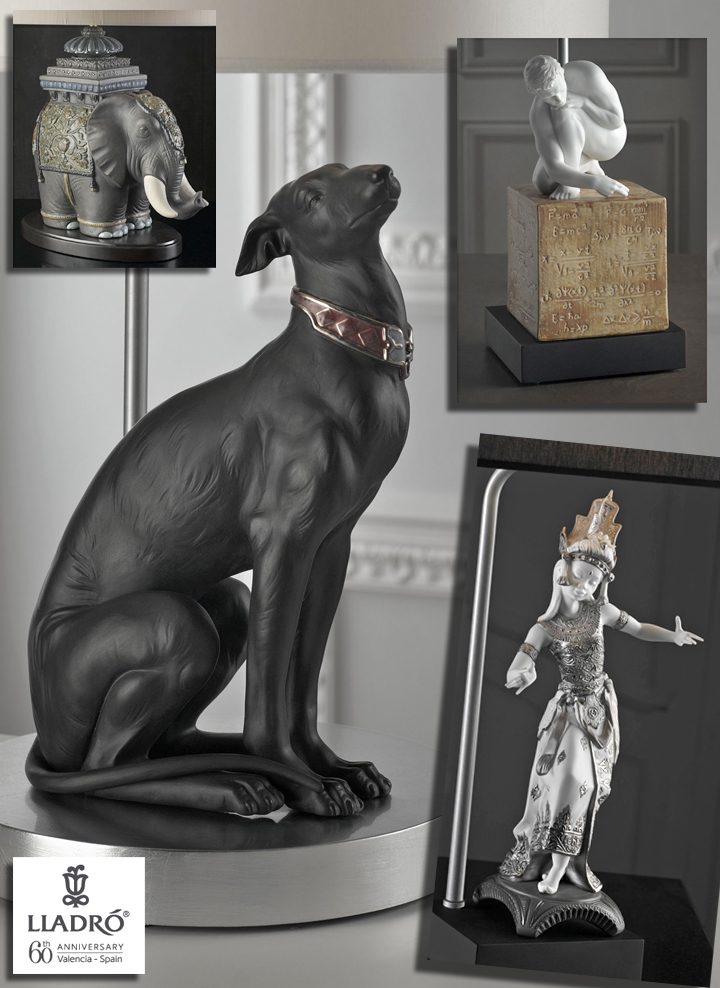 A WORLD OF STYLISH NEW TABLE LAMPS FROM LLADRO -- BRILLIANT!  At Studio of Style, we like to think of table lamps as a good friend -- a friend that has character and a unique sense of individual style (not to mention a joy to look at and always have around!).  Well, we can certainly say that we consider the new collection of table lamps from Spanish porcelain manufacturer Lladró as having all these characteristics -- and more! Celebrating its 60th anniversary this year, Lladró is one of the most famous porcelain houses of the 20th century -- and many people love the company for its wonderful, highly-detailed sculptures.  And now, the newest collection of table lamps can add even more warmth and style to a room (along with the company's collection of chandeliers, wall lamps and hanging lamps) with the comfort of light. Imagine -- if you will -- as the sun goes down, you draw the drapes, turn on your lamp, nestle into a comfortable chair with a cocktail or glass of wine -- and your favorite book, of course! We love the beautifully-executed Attentive Greyhound (by artist José Luis Santes) and the resplendent Siamese Elephant (by artist Antonio Ballester) as well as the graceful Bali Dancer with her expressive hands and the pensive Scientia sculpted man (by artist Ernest Massuet) atop a base of mathematical equations. So why have just an ordinary lamp, when you can have a work of art that brightens your room and your life? (Check out our June 25, 2012 post on Lladró pieces also!)
See the collection:  http://www.lladro.com/
Images courtesy Lladró
Posted by studio of style at 1:42 PM 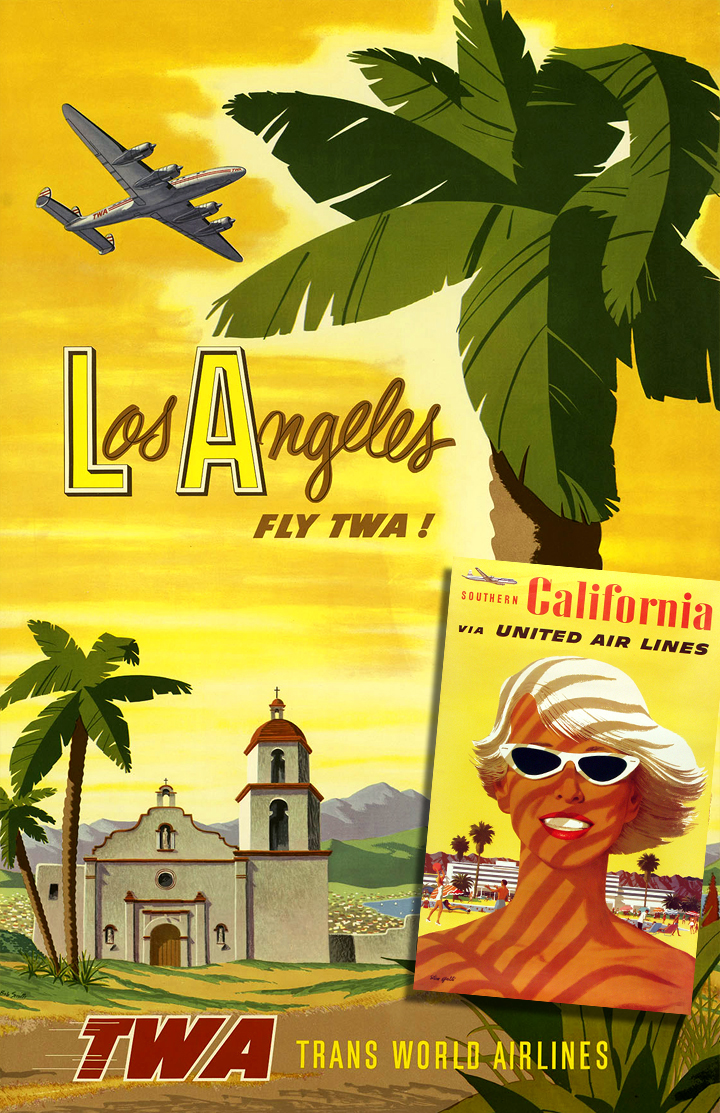 CALIFORNIA DREAMIN' (PART I) -- THE LURE OF SUNSHINE & VINTAGE TRAVEL POSTERS: There was a time when people flocked to the offices of travel agencies (seeing as how there weren't personal computers or the internet back in the 1950s and '60s) and all about them were large and gloriously bold travel posters covering the travel agency walls -- each one enticing prospective travelers with their colorful promises of adventure, exotic delights and most of all: lots and lots of sunshine and beautiful people. A handful of poster artists created this tempting world that just couldn't be resisted -- artists such as Bob Smith and his many posters for the now-defunct TWA airlines (shown above) and Stan Galli who designed sun-soaked gems for United Airlines (shown at lower right).  Smith and Galli, along with other artists David Klein and a gentleman simply known as Boyle, actually created perceptions of what travel destinations would be like by the way in which they portrayed the locales -- using bright Impressionistic and Fauve-inspired colors, iconic imagery such as historic sites, smiling people and idyllic landscapes, plus simple but dramatic illustrative renderings that capture the essence of the destinations with the most basic shapes and compositions -- after all, these posters were meant to be appreciated from afar in their travel agency settings or airport terminals -- thus details are not of as much importance as the overall scheme.  But therein lies the inherent beauty of vintage travel posters -- they evoke a time and place....and a feeling that there are indeed places so beautiful and transformative that they must be had.  And so, back in the day, travelers flocked to such sunny climes as Southern California in search of fun under the lemon-yellow skies of L.A., Hollywood and all parts surrounding them: the beaches, the Spanish missions, the groves of oranges and of course anyplace filled with that most important of element for travel destinations and travel posters: palm trees (as witnessed in the two posters shown above). Though posters no longer hold a special place in promoting the travel industry as they once did, they certainly hold a special place in the visual history of illustrative art for sure. So, if you're yearning for a sun-filled vacation while still staying at home, there's nothing like fabulous vintage travel poster to take you to another time and place....
Posted by studio of style at 11:04 AM